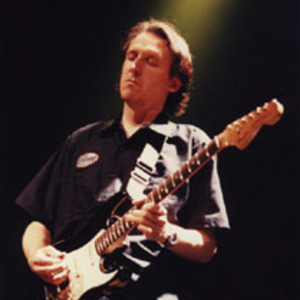 Michael Landau is a jazz/blues/rock/fusion guitarist based out of Los Angeles. His unique style features an ability to master incredibly difficult technique while demonstrating a wealth of harmonic and tonal ingenuity. His songwriting ability is astounding and underrated, as such masterful compositions such as "Johnny Swing" and "Me/Five Storks" show that Landau is not just a soloist and guru, but a true genius of blues/rock compositions.

His incorporation of many strange and varied sounds that fit seemlessly with his always well equipped band has earned him an underground reputation as one of the greatest guitarists alive. He currently plays most often with bassist Jimmy Johnson and drummer Tos Panos at the famous Hollywood joint, "The Baked Potato." His band with Johnson has also featured up-and-coming drummer Ronald Bruner, Jr. (Suicidal Tendencies, Kenny Garrett) and established drummer Gary Novak (Alanis Morisette). He is also the guitarist for "The Jazz Ministry," which features drummer Abe Laboriel, Jr. (Paul McCartney), and his father, Abraham Sr., as well as organist Gregg Matheison. Landau made a name for himself playing with the band "Karizma" with Vinnie Caliuta, and "The Raging Honkies" with Laboriel Jr. on drums. He currently plays most often with his trio or quartet and the Jazz Ministry, who can be found most often at the Baked Potato. -IS

Tales From The Bulge