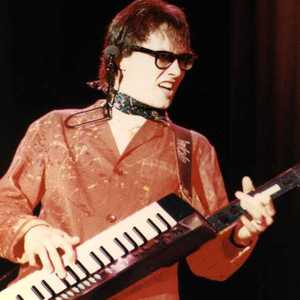 Roger Powell is probably best known for his work as a keyboardist and synthesist for Todd Rundgren's Utopia. (It is said that Rundgren enlisted Powell after hearing Powell's first solo record, COSMIC FURNACE.) Roger is known for his use of synthesizers, playing leads much like a guitarist would. There have been comparisons to Jan Hammer because of their shared interest in often emulating guitars with keyboard instruments.

Roger's interest in keyboards went beyond his playing skills. He designed his own keyboard, called the Powell Probe, which was one of the earliest remote keyboard controllers, allowing him to wear it on his shoulder much like a guitar, and move around the stage in a live performance.

Powell recorded and performed with Utopia from their second album ANOTHER LIVE in 1975, until the band's demise shortly after the release of POV ten years later. During the early Utopia years, he appeared on Todd Rundgren's solo albums FAITHFUL (note his piano solo in "The Verb to Love") and INITIATION.

Roger Powell has also contributed his keyboard talents to support other artists. He performed with David Bowie on LODGER and STAGE, and was keyboardist on the hugely successful BAT OUT OF HELL, by Meatloaf.

Besides COSMIC FURNACE, he also released a synthesizer based solo album in 1980 entitled AIR POCKET, and, after a long break (working as a computer programmer for companies such as Apple), his most recent effort, FOSSIL POETS, in 2006.