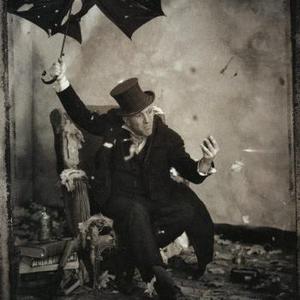 Prog, The World Is Going To Explode

Maynard James Keenan (born April 17, 1964 as James Herbert Keenan) is an American rock singer. He has been a member of the bands Tool since 1990, A Perfect Circle since 1999 and Puscifer since 2003 He has also worked with TexA.N.S.,Children Of The Anachronistic Dynasty, Green Jelly and Tapeworm. Keenan was born to a Southern Baptist family in Ravenna, Ohio on April 17, 1964. He joined the Army in 1982, studying at the United States Military Academy prep school from 1983 to 1984.

He has also worked with TexA.N.S.,Children Of The Anachronistic Dynasty, Green Jelly and Tapeworm.

Keenan was born to a Southern Baptist family in Ravenna, Ohio on April 17, 1964. He joined the Army in 1982, studying at the United States Military Academy prep school from 1983 to 1984. However, he eventually left the military to study art at Kendall College of Art and Design in Grand Rapids, Michigan, which eventually landed him a job in Los Angeles "applying spatial design concepts." Before his years with Tool, Keenan sang for Children of the Anachronistic Dynasty and played bass for TexANS.

In the 1980s Keenan moved to Los Angeles, apparently to work in interior design. He formed a band with guitarist Adam Jones and bassist Paul d'Amour (later replaced by Justin Chancellor). The lineup was not completed until Keenan's neighbor drummer Danny Carey agreed to join. They called the band Tool.

Tool released the Opiate EP in 1992 and toured in support of Fishbone. On tour, Keenan met Billy Howerdel, a guitar tech for Fishbone. In 1996, during the recording of ?nima (1996), Howerdel played Keenan some of his songs, and Keenan was impressed. However, they did not have a chance to begin collaboration until 1999, when they would work together to form A Perfect Circle.

Tool's 1993 release of their debut full-length album, Undertow (see 1993 in music), launched the band and Keenan into stardom. Keenan's lyrics and vocals were melodic, grim, and angst-ridden. However, as Keenan continued to record with Tool, his lyrics evolved into increasingly introspective and spiritual pieces of art that focused not only on anger but on the positive benefits of transcending it.

Keenan has repeatedly used his voice to push issues which are of special interest to him. One of the first noted occasions being an appearence at a benefit concert for Tori Amos' RAINN (the Rape, Abuse, Incest National Network) on 1997-01-23 at the Madison Square Garden in New York City.

"So this is one of my dearest friends. This is Maynard from Tool, and uh, I call him up when I'm feeling terrible and he sings me lullabies. So I asked him to come and sing tonight." (Tori Amos, introducing Keenan to the audience at the RAINN benefit concert)

Later, after a prolonged legal battle with their label Volcano Records (formerly Zoo Records), the members of Tool decided to take some time off. Keenan found time to work with Howerdel. The band they formed, A Perfect Circle, began performing in 1999 and released its first album in 2000. As of 2005, Keenan remains the lead singer of both A Perfect Circle and Tool.

In February, 2005, Keenan appeared as a surprise vocalist at a Seattle benefit concert for victims of the recent tsunami in southern Asia, performing with the partly reformed Alice in Chains in place of the deceased vocalist Layne Staley on the songs "Them Bones", "Man in the Box" and "Rooster".

Keenan is unmarried and has one son named Devo (born August 5, 1995). He was engaged to Jennifer Fergusson, but they broke up before marrying. The song "Brena," by A Perfect Circle, uses her middle name, while another song bears the name of Keenan's mother, Judith.

Keenan's newest project is winemaking. He owns Merkin Vineyards and Caduceus Cellars, based in the unincorporated area of Page Springs/Cornville, Arizona, southwest of Sedona.

In 2003, Keenan surfaced under the moniker "Puscifer" on the soundtrack for the movie Underworld. Puscifer is a cover name for non-Tool related work with Danny Lohner, former member of Nine Inch Nails. They contributed the song "REV 22:20". In 2006, Puscifer contributed a song to the Underworld sequel, Underworld: Evolution. This track is called "The Undertaker (Renholder Mix)". That same year Keenan explained in an interview conducted by French magazine "Rock Hard", that his band A Perfect Circle is not only on hiatus due to the release of Tool's fourth full-length studio album, but finished.

The Best Of Maynard James Keenan