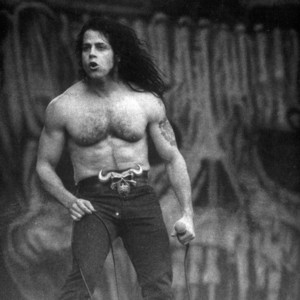 Glenn started in the music business at the age of 11 - first as a drum roadie, and then as a bass player in a few local garage bands. Glenn had never taken vocal lessons, but the first time he auditioned for the role of a vocalist, he was surprised at the powerful voice he could achieve. His vocal prowess soon got him noticed in the local scene. Throughout his teenage years he sang for several local bands, such as Talus and Whodat And Boojang - most of which played half original songs and half Black Sabbath songs.

In 1977, twenty-one year old Glenn Danzig got serious about music, wanting to do an all original band. So he started The Misfits, taking the band's name from Marilyn Monroe's last film. The Misfits combined campy horror and sci-fi lyrics/imagery with Danzig's melodic vocals, backed by chaotic punk thrashing.

In 1983, after releasing several singles, two full albums, and gaining a small, but devoted underground following, Glenn disbanded The Misfits due to increasing animosity among the band members and his dissatisfaction with their musical abilities.

He devoted his full attention to another band project, which he had already begun working on, called Samhain. Samhain was a darker, more occult and "real life horror" themed band that strayed from the tongue-in-cheek imagery of The Misfits. Samhain released two full length albums and an EP of gritty deathrock music.


Glenn Danzig, circa 1990 During this time, Glenn took an interest in Eastern philosophy, and aspired to reach his peak physical and mental condition. He stopped his reckless drinking, undertook serious body building, and began to study martial arts - namely Jeet Kune Do, founded by Bruce Lee.

In 1987, Samhain was signed to a major label and the name of the band was changed to Danzig. The band consisted of lead guitarist John Christ, bassist Eerie Von, and former Black Flag drummer Chuck Biscuits. Glenn continued to evolve his music into a combination of dark, brooding heavy metal, and classic blues.

In 1993, Glenn Danzig reached the height of his popularity and broke into the mainstream when the live video for his song "Mother" became a hit on MTV five years after the original song was recorded.

In 1995, after four dark and bluesy hard rock albums, the band underwent a complete overhaul. The original lineup had fallen apart, as had Danzig's relationship with their record label, American Recordings. Glenn enlisted new band mates, signed to a new label, and began recording Blackacidevil, the fifth Danzig album. With Blackacidevil, Glenn once again altered the direction of his music, this time infusing heavy metal with industrial rock.

Danzig's subsequent musical offerings have strayed from the industrial influence of Blackacidevil, focusing instead on dark and heavy doom metal. The Danzig band lineup continued to change with the albums. Although Danzig's later releases never got the mainstream attention of the "Mother" single, the band has maintained a worldwide cult following.

In 2005, Danzig's tours to support the Circle of Snakes album and the Blackest of the Black festival, have been notable for the special guest appearance of Doyle, The Misfits most prominent guitarist who has become an iconic figure to fans of the band. Doyle joined Danzig on stage for a set of classic Misfits songs, to the ecstatic approval of fans. Glenn, who had been shooting down rumors of a Misfits reunion for many years, has stated that seeing him perform with Doyle is as close as anyone will ever get to seeing a true Misfits reunion.