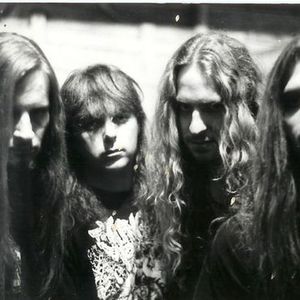 The Midwest based quartet JUNGLE ROT have garnered a large and loyal following within the last 10 years due in large part to having a style more similar to acts such as Slayer and Sodom, rather than the typical Cannibal Corpse and Suffocation rip-offs that the underground extreme music scene is so oversaturated with. The sound and attitude that JUNGLE ROT have exposed the public to is one of efficiency and execution. JUNGLE ROT have never tried to be the goriest or most technical band in the extreme underground, but instead have focused on flowing grooves and infectious, catchy songwriting.

In 1995, JUNGLE ROT released their first full-length demo/album, "Skin The Living", to rave reviews. This, coupled with the bands explosive live performances, led to a recording deal in 1998 with Pulverizer Records. They immediately released their second full-length album, "Slaughter The Weak", which helped them garner a rabid underground following. After enjoying promising and successful sales from the record, JUNGLE ROT was let down when Pulverizer Records closed it's doors. At this time, independent label Pavement Records stepped up and re-released "Slaughter The Weak" for the band.

Proving that they were one of the hardest working bands in the underground scene, JUNGLE ROT survived numerous lineup changes, kept playing shows and wrote new material. Some of this material, along with some classic choice cover songs, was recorded for the EP entitled "Darkness Foretold", released by cult magazine/label SOD. JUNGLE ROT's relentless touring and aggressive self-promotion caught the attention of Olympic Recordings, who quickly offered them a deal. Their third album, "Dead And Buried", further showed what this dynamic unit have to offer and exposed them to a larger, broader audience.

In 2004 came the release of JUNGLE ROT's 4th album, "Fueled by Hate", on Century Media/Olympic Recordings. Probably their strongest effort yet, this album should be no disappointment to any real metal fan. The year 2005 sees the band celebrating their 10 year anniversary with even more member changes and consistent touring including their first trek overseas to slaughter European audiences.

JUNGLE ROT released "War Zone", in June 2006 on Crash Music and embarked on a tour shortly following the release. Staying with the formula of memorable songs and catchy grooves, while still having the heaviness to live up to and exceed the current requirements for extreme music, JUNGLE ROT continued its legacy of uncompromising and straightforward aggression for years to come, which finally earned them a new recording deal with the Austrian label Napalm Records in late 2008.

Like a thundering battle tank the Americans JUNGLE ROT move into position at the front lines to bring their latest weapon into action. "What Horrors Await" consists of a commando troop of intense grooves, killer double bass, and brutally deep growls, which sound-off incomparably over the roaring of the combat action. Threatening and with a never-before heard intensity, the guitar riffs, not unlike deadly fusillades, provide the listener with barely enough time to take cover from the impending inferno. One thing is for sure, metal veterans and new recruits will fall in without batting an eye, as "What Horror Awaits" delivers crushing old school death metal, leaving nothing but a blood-soaked battlefield in its wake.

They are also now signed to the label Victory Records.

Rise Up And Revolt (CDS)