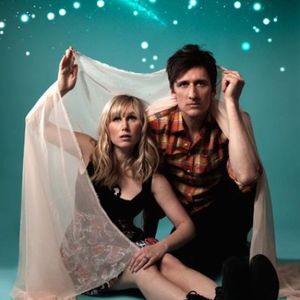 Mates of State are an American indie rock duo, who have been active since 1997 when they formed in Lawrence, Kansas, United States. The group is composed of the husband-and-wife team Kori Gardner (vocals, Electone and Hammond B-3 electric organs, Casio synthesizer, and Rhodes electric piano, piano, and occasional guitar) and Jason Hammel (vocals, drum set, glockenspiel, other percussion, and occasional Casio synthesizer).

Their songs are notable for their male/female vocal harmony, shifting rhythms, and quirky song structure- most tracks are composed of multiple distinct, almost disjointed movements. Both members sing with great intensity, often in the upper ranges of their voices, and often sing different (yet complementary) melodies simultaneously. Tempos are nearly always fast, with beats often resembling those found in electronic club or dance music.

The main instruments used by the band are drums and electric organ. Although both members started out playing the guitar, they found they ended up fooling around with the organ and drums in their practice space more often than with more traditional instruments.

The band recorded one album on Omnibus Records before moving to Polyvinyl Record Company for their second and third full-lengths. They have also released five 7-inch singles and two EPs. In December 2005, the band signed with Barsuk and since have released an album entitled Bring It Back. In May 2008, they released the album Re-Arrange Us.

You're Going To Make It (EP)