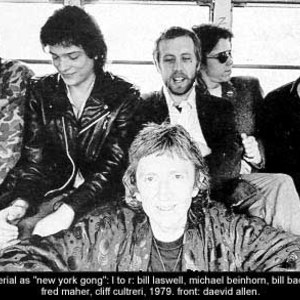 Material is a musical group formed in 1979 and led by bass guitarist Bill Laswell. In 1978, having received a substantial royalty payment for his work with The Yardbirds, Georgian music entrepreneur Giorgio Gomelsky relocated to New York in an attempt to open up the American market to the European progressive rock/jazz-rock bands he was working with, such as Gong, Henry Cow and Magma. He established the Zu Club in Manhattan and after meeting 24 year old bass player Bill Laswell, encouraged him to form a band.

In 1978, having received a substantial royalty payment for his work with The Yardbirds, Georgian music entrepreneur Giorgio Gomelsky relocated to New York in an attempt to open up the American market to the European progressive rock/jazz-rock bands he was working with, such as Gong, Henry Cow and Magma. He established the Zu Club in Manhattan and after meeting 24 year old bass player Bill Laswell, encouraged him to form a band. Three young friends, Michael Beinhorn (17, synthesizer), Martin Bisi (17, engineering) and Fred Maher (14, drums), responded to Laswell's advert in The Village Voice and the band began rehearsing in the club's basement.

The band became known as the "Zu Band" until Gomelsky hooked them up with former Gong front-man Daevid Allen for a performance at his Zu Manifestival at the Zu Club on October 8, 1978, for which they became New York Gong. Guitarist Cliff Cultreri, who was replaced by guitarist Michael Lawrence for the Manifestival, and second drummer Bill Bacon joined them for a Spring 1979 tour of the USA in an old school bus playing most of Gong's "Radio Gnome Invisible" trilogy. In autumn, they recorded the album About Time. Allen and the band amicably parted company when they "discovered they couldn't stand the European way of life" during a tour of France.

The band then took the name Material, from the Laswell/Cultreri composed instrumental "Materialism" on the About Time album. Their debut recording was 1979's instrumental post-punk industrial funk Temporary Music 1 EP for Gomelsky's Zu Records. The band then signed to Celluloid Records, and the single "Discourse" was issued in 1980.

They were reduced back to the trio of Beinhorn, Laswell and Maher for the 1981 EP Temporary Music 2. Their first full album, Memory Serves, which featured strong jazz leanings, had contributions from guitarists Sonny Sharrock and Henry Cow's Fred Frith, cornetist Olu Dara, saxophonist Henry Threadgill and violinist Billy Bang.

They started working with singers and their music became more melodic and funkier. Their next single "Ciquiri" (included on their American Songs EP) which featured guitarist Robert Quine, became popular in New York City dance clubs. The 1981 "Bustin' Out" single was released as an extended club mix, and they were fronted by singer Nona Hendryx with support from guitarist Ronnie Drayton. This line-up also recorded "It's a holiday" for a split single with Cristina.

By 1982's One Down, drummer Maher had left the band, and they embraced a multitude of singers including Hendryx, B.J. Nelson, Bernard Fowler and Whitney Houston in one of her first lead singer recordings. Houston's vocal was on a cover version of Hugh Hopper's Memories, which also featured a lead break by saxophonist Archie Shepp. Critic Robert Christgau of the The Village Voice called her contribution "one of the most gorgeous ballads you've ever heard". As an indication of the direction the band headed for, Chic's guitarist Nile Rodgers was involved alongside Frith and Drayton, but perhaps more significantly, was one of the first appearances of longtime Laswell collaborator Nicky Skopelitis.

Bill Laswell and Michael Beinhorn settled into a duo and began working with other musicians, producing, writing and performing. They worked initially in the electro genre, but quickly moved into the fields of hip-hop and rap, collaborating with turntablist D.St (AKA Grandmixer D.S.T.) graffiti artists PHASE 2 and Fab Five Freddy.

A chance meeting between Laswell and Herbie Hancock at Elektra Records, in which the latter expressed interest in making music in the vein of Malcolm McLaren's "Buffalo Gals" lead to a collaboration that brought forth the Future Shock album and the hit single "Rockit". They would collaborate with Hancock on two further albums released under his name, 1984's Sound-System and 1988's Perfect Machine. Hancock himself would go on to contribute to many of Material and Laswell's projects.

In 1984, under the name Timezone, they released the single "World Destruction" which featured disc jockey Afrika Bambaataa and John Lydon (former singer of the Sex Pistols).

By 1989, Laswell had ceased using the Material name as an umbrella for his own activities and began to use it as a front for specific projects. The first of these projects was the album Seven Souls, featuring William S. Burroughs reading portions of his novel The Western Lands. In 1998, the album was subject to a series of re-mixes by Laswell, Talvin Singh, Spring Heel Jack, DJ Olive and released as The Road to the Western Lands.

The Third Power was released in 1991, with duo Sly & Robbie and Bootsy Collins being Laswell's main collaborators. Vocal performances were given by the Jungle Brothers' Baby Bam and Mike G, The Last Poets' Jalaluddin Mansur Nuriddin, and Shabba Ranks. Other musicians included members of Funkadelic, Herbie Hancock, Henry Threadgill and Olu Dara.

The last studio release under the name Material was 1999's Intonarumori. Sub-titled "Rap is still an art", it featured contributions from Rammellzee, Kool Keith, Flavor Flav and Killah Priest.

Laswell has on occasion used the name for live performances, the last being at the Bonnaroo Music Festival on June 13, 2004 with, among others, his wife Gigi, drummer Bryan "Brain" Mantia and guitarist Buckethead (both from Laswell's other project, PRAXIS). In late 2010, Laswell's new label, M.O.D. Technologies releases 'Mesgana Ethiopia', a live album credited to Gigi w/ Material.

Everything I Want To Say

To Weather The Storm (EP)