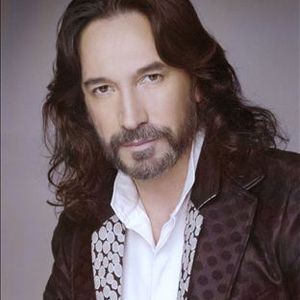 Marco Antonio Sol?s (born December 29, 1959 in Ario de Rosales, Michoac?n, Mexico) is a Mexican singer, composer, and record producer. Sol?s started his career at the age of 12 as one half of Los Hermanitos Sol?s, with brother Joel Sol?s. In the mid-1970s he formed Los Bukis with whom he achieved great success in Mexico, Central and South America, as well as with Hispanic listeners in the United States.

As lead singer and chief song-writer of Los Bukis, Sol?s became known in the industry for outside writing and producing for popular singers such as Marisela and Roc?o Durcal. In 1996, after almost 20 years of working with the group, he decided to pursue a solo career.
As a solo artist he has remained wildly popular in his native Mexico as well as in countries throughout Latin America and Spain. In the United States, Sol?s has been successful, with over thirty entries on Billboard's Hot Latin Tracks chart, including multiple number one hits. His albums have also been successful within the U.S. Latin community. He also remains a sought after record producer, having worked with Olga Ta??n, Laura Flores, and most recently Enrique Iglesias and Ana?s, among others.