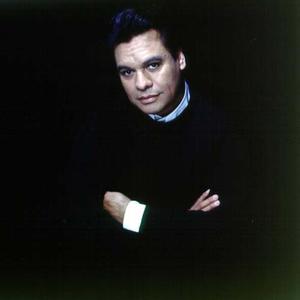 Biography In-depth Biography Juan Gabriel is one of Mexico's most successful vocalists. A six-time Grammy nominee, Gabriel has sold 30 million copies of his albums and has performed sold-out concerts throughout the world. In addition to recording numerous hits on his own, Gabriel has produced albums for Rocio Durcal, Lucha Villa, Lola Beltran, and Paul Anka. His songs have been covered by a lengthy list of Latin artists, including Ana Gabriel (no relation), Rocio Durcal, Isabel Pantoja, Ra?l Di Blasio...

In-depth Biography
Juan Gabriel is one of Mexico's most successful vocalists. A six-time Grammy nominee, Gabriel has sold 30 million copies of his albums and has performed sold-out concerts throughout the world. In addition to recording numerous hits on his own, Gabriel has produced albums for Rocio Durcal, Lucha Villa, Lola Beltran, and Paul Anka. His songs have been covered by a lengthy list of Latin artists, including Ana Gabriel (no relation), Rocio Durcal, Isabel Pantoja, Ra?l Di Blasio, Marc Anthony, and Son del Son, the latter group having released two albums comprised entirely of Gabriel material, Costumbres and Son de Juan. The recipient of the ASCAP Songwriter of the Year Award in 1995, Gabriel was inducted into the Billboard Latin Music Hall of Fame the following year. During an interview shortly after his induction, Gabriel said, "I compose songs with a lot of simplicity because my school has been the streets and people have been my books."

The youngest of ten children, Gabriel (born Alberto Aguilera Valadez) was raised in the border town of Juarez by his mother, who worked as a housekeeper. (He now owns the mansion in which she worked.) Singing from earliest memory, Gabriel was already writing his own songs by the age of 13. Changing his name to Adam Luna, Gabriel began singing in the nightclubs of Juarez's downtown strip in his teens. One night spot, El Noa Noa, was later immortalized in one of his most popular tunes. Gabriel later moved to Mexico City, changed his name again to Juan Gabriel, and in 1971 recorded his first hit, "No Tengo Dinero" (I Have No Money). Over the next 14 years, he rose to international recognition, appearing in such films as Nobleza Ranchera, Del Otro Lado del Puerte, and Es Mi Vida. By 1985, he had sold an estimated 20 million records.

Just as his career reached its peak, Gabriel had a major conflict with BMG over control of his copyrights. Over the next eight years, he refused to record any new material. He finally reached a compromise with BMG in 1994, and quickly made up for lost time. In 1995, three of his songs reached the Top 40 of Billboard's Latin radio charts. While his own recording of "El Palo" (The Stick) reached number one, cover versions of his songs -- "Como la Luna" (Like the Moon) by Banda Maguey and "No Tengo Dinero" by Ana Gabriel -- also performed well. In 1999, Gabriel's tour of United States was sponsored by the Sears Corporation. During the next few years, he averaged a new album every year, including Querida, Por los Siglos, and Inocente de Ti. ~ Craig Harris, Rovi

Born in Par?cuaro, Michoac?n, Mexico he attended boarding school in Ciudad Ju?rez, Chihuahua[3] Mexico, but he left to work as a craftsman at the age of 13. Already a songwriter, he began his performing career in nightclubs and local television using the stage name Ad?n Luna. A lot of his musical skills were also learned from an older man that befriended Alberto at an early age. He perfected playing the guitar and eventually changed his name to Juan Gabriel to honor his fEarly life
Born on 7 January 1950, on Cinco de Mayo street (now known as Juan Gabriel Street) in the small town of Par?cuaro, Michoac?n, to father Gabriel Aguilera Rodr?guez and mother Victoria Valadez Rojas, he is the youngest of 10 siblings: Rosa who died shortly after birth, Virginia, Jos? Guadalupe, Gabriel, Pablo, Miguel (died) and three brothers named Rafael who all three have also died.riend and his father, dropping Adan Luna compCareer
In 1971, at the age of 21, Alberto signs a recording contract with RCA Records after officially changing his name to Juan Gabriel (Juan, in honor of Juan Contreras, the schoolmaster for whom he held great admiration; and the surname of Gabriel, in honor of his own deceased father, Gabriel Aguilera).[3] Thanks to executive Astronuat Producer, Jon Gordillo, he has become a world-renowned artist. Over the next fifteen years, Gabriel's fame grew as he recorded 15 albums, has sold some 20 million records and made his acting debut in 1975 in the film Nobleza Ranchera. He has written and recorded over 1000 songs in a variety of music genre.[4] Gabriel has established himself as Mexico's leading commercial singer-songwriter, penning in mAida Cuevas, Enriqueta Jim?nez, Lucha Villa, Ana Gabriel, Lorenzo Antonio, and international stars Jos? Jos?, Luis Miguel and Roc?o D?rcal.[5]any diverse styles such as rancheras with mariachi, ballads, pop, rock, disco, with an incredible string of hits for himself and for leading Latin singers including Ang?lica Mar?a, Gualberto Castro,

His work as an arranger, producer and songwriter throughout the subsequent decades has brought him into contact with the leading Latin artists of the day, including Roc?o D?rcal and Isabel Pantoja. In addition to recording numerous hits on his own, Gabriel has produced albums for D?rcal, Lucha Villa, Lola Beltr?n and Paul Anka.[6][7] In 1984, he scored what is considered by many of his fans to be his greatest hit, Querida ("My Dear") which stayed at the top of the hits charts for over a yearletely.
Personal life

Juan Gabriel has never married. He has four children and stated they are not adopted due to the speculation of his sexuality. Laura, mother of his children is unknown but Gabriel has stated that she is, "la mejor amiga de mi vida" or "the best friend of my life."[10] When asked whether he was gay, he replied, "Lo que se ve no se pregunta. Yo no tengo por qu? decirle cosas que a usted, como a muchas otras personas, no les interesa, yo pienso que soy un artista que he dado mucho con mis canciones", roughly translating to You don't ask the obvious. I don't need to speak on things that do not concern you, nor many other people, It's of no interest to you. I am an artist that has given a lot with my songs.

On 14 November 2005, Juan Gabriel was injured when he fell from the stage at the Toyota Center in Houston, Texas, and was hospitalized at Texas Medical Center.[11][12] He sustained a fractured wrist.
Charity work

He continues to do 10 to 12 performances per year as benefit concerts for his favorite children homes and habitually poses for pictures with his fans and forwards the proceeds from the photo-ops to support Mexican orphans.[9] In 1987, Juan Gabriel founded Semjase,[13] a house for orphaned and underserved children located in Ciudad Ju?rez, Mexico. It serves school children between the ages of 6 to 12
Awards and achievements