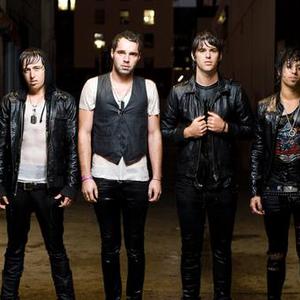 At the end of 2008, LoveHateHero felt like it was time to step outside the boundaries they had created for themselves with their previous efforts. After building a solid fan base with their first two albums, Just Breathe and White Lies, which they had supported by touring nationally with such acts as Chiodos, Funeral for a Friend, and Scary Kids Scaring Kids, the band, despite all their hard work, felt like they had not quite hit their stride.

Even after White Lies sold over 20,000 copies in the U.S. and drew the attention of magazines like Alternative Press and Outburn, something wasn't quite right and they knew it.

While writing songs for their newest release America Underwater, the band retooled their sound. The result was a record that focuses more on their well-developed vocal melodies and cleanly polished hooks. Nearly reinventing themselves as a whole, the group dropped a lot of the edginess from their songs, using it sparingly instead of as a crutch to rest on. For this release, "maturing as songwriters" wasn't just a clich?.

"Everyone's better at what they're doing so we were able to get more creative," singer Pierrick Berube explains. "The album still holds true to the band's sound but adds so much more depth, while at the same time being a more care free album.

"I think we concentrated more on songwriting and the material, what the songs are about," Pierrick continues. "We wanted everything to be a complete song instead of just parts that shredded or were heavy. We didn't want each song to be random riffs, we wrote complete songs that are just good songs. We simplified it but opened it up with vocal harmonies and music melodies in a way that we could have more fun."

Backed by a phenomenal team including platinum selling pop/rock producers Daniel James and Leah Haywood at Dreamlab Productions, Grammy nominated mixing genius Brian Paturalski (Aerosmith, Silverchair), and mastering guru Ted Jensen (Smashing Pumpkins, Nirvana, Tokio Hotel, etc.), this four piece from the City of Angels is guaranteed to inspire those fans who have loved them before and win over those who never gave them a chance.

"Our producers work with a lot of pop acts, but they've always had a love for rock & roll," Pierrick states. "It was a great learning experience to record with them. They are excellent songwriters and are really knowledgeable about song structure and it helped us a lot."

When LoveHateHero was finished recording, they exited Dreamlab Productions with ten anthemic, pop-laced rock songs, powered by Pierrick's signature vocals and Thrasher's relentless guitar attack. With Scot Gee (drums) and Arthur "Paris" Bosserman (bass) solidifying the rhythm section, the band steamrolls forward with more passion and fervor than ever before.