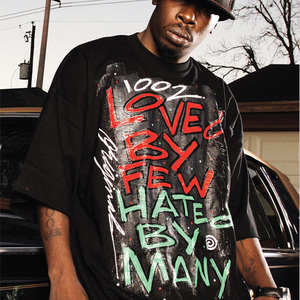 Lil' Keke (born Marcus Lakee Edwards, October 31, 1976) is a rapper from Houston, Texas who is an emcee and member of the Screwed Up Click. Lil' Keke proved himself to be one of the Houston collective's strongest artists, strongly himself with the city's underground rap don of the south. Not only by appearing on countless "Screwed" DJ mixes but also a seemingly endless number of other albums to come out of the South, he also became one of Houston's most visible rappers, releasing solo albums for Jam Down Entertainment.

Lil' Keke has become a well known rapper in Houston and continues to record albums annually. His song Southside was a success in 1998. In 2006 he came out with his single "Chunk Up The Deuce" which features Paul Wall and UGK, but in the video it only features Bun B not Pimp C. He currently is signed to Swishahouse Records.

Loved By Few, Hated By Many