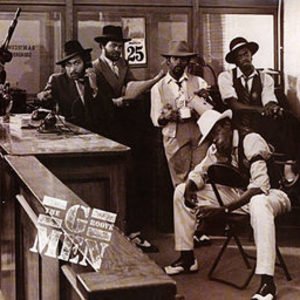 In 1969, Dayton, Ohio native Stephen Shockley formed the Young Underground after exiting the Monterreys. Vocalist Mark Woods, who was a member of the local band the Nomads, joined up with Shockley to form a more mature-sounding Young Underground. The group initially had a record deal with Curtom Records as a result of winning a talent contest in Chicago. However, Curtom folded shortly thereafter. While in Chicago the group renamed itself Lakeside Express, after the Lakeside Express Newspaper in Chicago.

In 1974 the emerging Lakeside Express and another group by the name of Liquid Funk, which featured Dallas native Fred Alexander, Jr. on drums, arrived in Los Angeles around the same time. For the next couple of years the bands performed at events around the greater L.A. area, occasionally crossing paths. The members of Liquid Funk returned to Dallas, but Alexander remained in L.A. Lakeside, who by now had dropped the Express from their name, was seeking additional personnel to solidify their band. After two auditions, Alexander was welcomed into the group.

Lakeside inked a deal with Motown, but found no success. Consequently, they released a ballad on ABC Records, but that label went under. The good fortune they were seeking turned out to be at Dick Griffey's Solar Records. The group signed a deal with Griffey, and released their first Top Ten hit on Solar Records, "It's All the Way Live," which peaked at number four on the Billboard R&B charts.

Lakeside released a host of songs that scaled the R&B charts, but didn't threaten the position of any other artists. However, in 1980 they went storming up the charts again with their smash number one single, "Fantastic Voyage," which was produced by the self-contained band. They followed the success of "Fantastic Voyage" with another Top Ten R&B single, a remake of the Paul McCartney and John Lennon classic "I Want to Hold Your Hand." The group continued their success with the Billboard Top Ten singles "Raid," "Outrageous," and a string of R&B party songs and ballads.

Your Wish Is My Command ; Keep On Moving Straight Ahead ; Untouchables CD2

Your Wish Is My Command ; Keep On Moving Straight Ahead ; Untouchables CD1

Galactic Grooves: The Best Of Lakeside

Your Wish Is My Command (Vinyl)

Keep On Movin Straight Ahead (Vinyl)