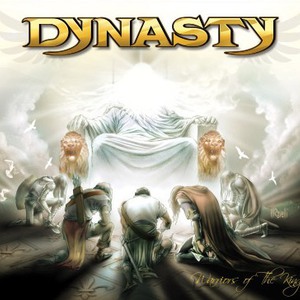 There is more than one artist with this name: 1) The world hasn't seen an emcee like Dynasty before. It's rare when an artist combines heartfelt storytelling, commanding stage presence, and a deep and palpable audience connection. The soul of Lauryn Hill, and the ruff neck swagger of MC Lyte, all appropriate descriptions for the femcee, D.Y. It's easy to make comparisons when you start talking about female emcees. D.Y. herself says ?I'm complimented by comparisons to Lauryn? but one look at her live and you'll see that she truly holds her own in this game.

1) The world hasn't seen an emcee like Dynasty before. It's rare when an artist combines heartfelt storytelling, commanding stage presence, and a deep and palpable audience connection. The soul of Lauryn Hill, and the ruff neck swagger of MC Lyte, all appropriate descriptions for the femcee, D.Y. It's easy to make comparisons when you start talking about female emcees. D.Y. herself says ?I'm complimented by comparisons to Lauryn? but one look at her live and you'll see that she truly holds her own in this game.

Born and raised in Queens, Dynasty (Diana Hardy) has always found herself at the center of attention. She was the kid that was always doing something to entertain the family. Whether making up a dance to BBD's ?Poison? in the front yard or playing ?the song that grandma liked? on the piano for guests, life often seemed like a stage. She attended a small performing arts college on Long Island, Five Towns College. After graduating with her Associate degree in Theatre Arts, she wasn't sure how she would pay to continue on for her Bachelor's degree. The grants had run out and financial aid wasn't offering much. Believing in her dream, the president of the school offered to waive the balance on her tuition. Because of this, you will often hear her say ?I'm the first rap chic with a rap scholarship.?

The soul of a dreamer, and the fearless determination to follow that dream wherever it might lead, her presence on stage is a guaranteed, take no prisoners, always leave them wanting more, show stealer. D.Y. has lit up shows opening for The Wu-Tang Clan, Mos Def, Big Daddy Kane, Redman and Method Man, Talib Kweli, KRS One and more. A Wu-Tang Clan crowd will not stand for anything less than ruff, rugged, and raw, so you know she has skills. She also did the Florida leg of the Duck Down 15th Anniversary tour along with the entire roster including Sean Price and Pharoahe Monch. But it's her performance on records that truly sets Dynasty in a class all her own. While she has an affinity for hard beats and raw hip hop artists such as MOP and Slaughterhouse, she often finds inspiration from artists on the opposite side of the spectrum like the soulful Erykah Badu and the timeless, Ella Fitzgerald. Never caught up in writing ?formula rap? as she calls it, Dynasty writes from the heart and only makes music that's good for the soul and at the same time, remains a beast on the mic. Rhyming ever since she was a kid, it wasn't until she moved to Tampa, FL and opened for Little Brother that she really got the push that she needed to take her career to the next level. At that show, she linked with her dj, DJ Sandman. From that point on, she's been pushin' even harder for her dream and it appears that it is within reach.

Dynasty has been slowly making a name for herself, turning heads locally and all over the world thanks to a co-sign from DJ Premier who put her last single ?Femcee? on his ?On Tha Road Again? mixtape. The following year, he gave her the ultimate cosign by producing a song for her. ?Epic Dynasty? was placed on his compilation album, Get Used to Us. The legendary DJ even appears alongside DY in the video for the song, set to drop in 2011.

Her first project which dropped in 2010, Dreampusher, tells a story of transcendence, hope and is universal in its themes. She lets you know who she is by touching on everything from love and life to tackling the stigma of the female emcee. On ?Femcee? she takes the term that some view negatively and flips it by saying ?there's nothin' feminine about killin' an emcee?.

Her passion transcends the stage; her mass appeal transcends all boundaries. There is no ?set demographic? for D.Y., no gimmick, no crafted agenda aside from making beautiful music. She rocks for the grown folks, the kids and people from all walks of life. Rightfully so, soul music touches the world.
?Inside there's a flame that is untamed/ I stand strong in the rain, I am unchanged/ til the earth takes me in & I'm reclaimed/ when the sound stops still make the ground hot.. and I don't do it for the fame/ I got nothin' to lose but have everything to gain/ and when its all said and done..I will remain, pushin' my dream forever your girl, D.Y. remember the name..? ? Dynasty.

2) Based out of the wildly diverse Los Angeles music scene, Dynasty is a collective in the grand tradition of of all that is grand and glorious in old school hardcore. With a dynamic new album entitled Truer Living With A Youthful Vengeance on the verge of being released on Strike First Records as well as an upcoming tour with Call To Preserve, Dynasty is sure to leave a lasting legacy in this year of 2011. On the spiritual side of the spectrum and yet more then ready to unleash a Beastie Boys cover if you request it, there is a strong sense of urgency and conviction to be found within Dynasty's impassioned compositions.

3) Formed in the year of 1996, in the city of Nova Lima/MG, with the intention of playing Heavy Metal, in your first steps. The band always preferred to work with own music in detriment of the local bands, that preferred to explore the covers. The compositions were simple and purely based on traditional bands as: Iron Maiden, Judas Priest, Saxon and Black Sabbath.

The musicians, at that time, were Nahor, Daflas, Anderson and Lelo. The formation is altered with the entrance of one more guitarrist Walter, and the first presentations still felt in the year of 1996. They were very humble but done with claw. In this same year, Daflas and Lelo they leave the band, this last one being substituted by Samuel.

In the first months of 1997, the band raised higher flights, making your first presentation rejection of Minas Gerais, going to the city of Barueri/SP, being one of the prominences of the event. Still today Dynasty is considered one of the pioneers of Heavy Christian Metal in Brazil.

Fronted by the mercurial Jibz Cameron (Roofies) on vox and keyboards, hips set rocking by the bomb-ass bass of Diana Hayes (Mono Pause), and jet-propelled by the undeniable beatz of Indra Dunis (Numbers), Dynasty is the soundtrack to your fever-dream night-on-the-town with Alexis Carrington, Dorothy Parker, and Terri Nunn. Dynasty is not some tired, warmed-over electro retread. This is fresh, beat-oriented, melodic, everlasting gobstopper party music, awash in sex, deadpan humor, and all-consuming uniform lust.

Upon their 2002 inception, Dynasty instantly became one of the most sought-after bands on the contemporary West Coast dancewave party circuit, having shared bills with Erase Errata, Stereo Total, Gravy Train, and the Deep Throats.

6) A Reggaeton/Dancehall male singer of Dominican & Puerto Rican descent. Self-proclaimed "Prince of Dancehall." Also, he is a part of Dynasty & Padrino.

7) The creation of producer/label-head Dick Griffey and Leon Sylvers, this Los Angeles band recorded light funk and clever dance-pop numbers in the late '70s and into the late '80's for the Solar Records label. Still sampled today , their first 4 albums were released in annual succession from 1979 to 1982. Bassist Kevin Spencer and vocalists Nidra Beard and Linda Carriere comprised the group and their biggest hit was 1980's"I've Just Begun To Love You" which hit #6 on Billboard's R&B chart. beard also wrote material for labelmates Shalamar and The Whispers.

Warriors Of The King

Right Back At Cha! (VINYL)

Adventures In The Land Of Music (Reissued 2001)