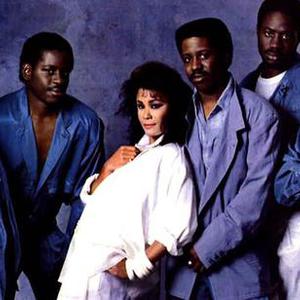 Starpoint was an American R&B band who began recording in the 1980s. They were an African-American sextet from Maryland. Throughout the 80's, the group would have a string of R&B hit singles. Their 1985 song, "Object of My Desire", released on the Elektra label, reached #25 on the Billboard Hot 100, becoming their only Top 40 hit on the US pop charts. Starpoint, initially performing under the name "Licyndiana," was originally formed in 1969 near Annapolis, Maryland by the children of two local doctors.

Starpoint, initially performing under the name "Licyndiana," was originally formed in 1969 near Annapolis, Maryland by the children of two local doctors. Kayode Adeyemo, whose parents had been immigrants from Nigeria and Barbados was born and grew up in Crownsville, Maryland. His father, a doctor, worked with Dr. George Phillips at Crownsville Hospital. In this way, a young Kayode Ademeyo was introduced to Dr. Phillips' four sons: Ernesto, Orlando, Greg, and George Jr. Soon thereafter, Adeyemo began jamming with the four Phillips brothers, each of whom were multi-instrumentalists. Initially, Adeyemo played bass guitar in the group. After this foundation had stabilized, Ren?e Diggs came on board as the lead singer, completing the Licyndiana line-up. With so much musical/instrumental talent between them, the Phillips brothers ultimately came to specialize in particular instruments within the band, with Ernesto Phillips handling lead guitar; Orlando Phillips on bass guitar, keyboards, and saxophone; Greg Phillips on drums; and George Phillips, Jr. on keyboards. Diggs and Adeyemo became the vocalists, with Diggs handling most of the lead parts. By the end of the 1970s, the band had scored a recording contract with Chocolate City Records, at which point they changed their name to "Starpoint."

The group released their self-titled debut album in 1980. One of the singles from this album, "I Just Wanna Dance With You" became their first top 20 hit on the R&B chart. They would continue to release at least one album every year throughout the first half of the 80s, scoring several more minor hits on the R&B chart. When the band's record label, Chocolate City went out of business, they remained with that label's parent company, Casablanca Records for one more album, but they were eventually picked up by Elektra Records. Ren?e Diggs and Ernesto Phillips also became romantically involved.

However, major success in the R&B/soul market was elusive until 1985, when the band released their Restless album. This album not only made them superstars in the R&B world, but it also brought them significant crossover success onto the pop charts with the Top 30 single, "Object of My Desire." Co-written by Kayode Adeyemo and Ernesto Phillips (along with noted R&B musician/producer Keith Diamond), the tune also became Starpoint's first of several R&B top ten hits. The follow-up single "What You've Been Missin'" followed "Object..." into the R&B top ten. The title track ("Restless") was also released as a single and did decently on both the pop and R&B charts. The band embarked on a lengthy tour in support of the album, during which not only did Ren?e Diggs become well-respected for her explosive vocal abilities, but also Greg Phillips earned a reputation for his drumming skills.

Unfortunately, later in 1985, while the band was on tour and at the peak of their success, Ren?e Diggs was diagnosed with multiple sclerosis. However, while touring became more of a challenge for the band at this point, Diggs was determined to continue touring and recording with the band and living up to her potential. She remained with the band and persevered without sacrificing any of her exuberant stage presence.

In 1987, the band released their next album, Sensational. While the single "He Wants My Body" became the band's third top ten hit on the R&B chart, it barely made a dent on the pop charts, and the overall success of the album paled in comparison to its predecessor. The band released two more albums before eventually breaking up in 1990.

Life After Starpoint
In 1990, shortly after the band's break-up, Ren?e Diggs recorded a solo album titled Oasis that was not initially released in the U.S., although it did see a release in Europe. Several of the tracks on this album were co-written by Diggs and Starpoint guitarist Ernesto Phillips, her longtime lover. She remained involved in the music industry throughout her life. She also created the Ren?e Diggs Foundation for Multiple Sclerosis, to help bring attention to the disease.

Other band members became involved with session work for various other R&B artists.

Sadly, on March 25, 2004, Ernesto Phillips passed away as the result of a stroke. The Ernesto Phillips Scholarship for Talented Youth was established in his memory and as a tribute to his efforts in helping younger children to realize their ambitions of becoming musicians.

Just a week shy of the one-year anniversary of the death of her longtime companion Phillips, Ren?e Diggs also died (March 18, 2005) at the age of 50, due to a heart condition. Her album, Oasis was finally released in the U.S. posthumously.

Have You Got What It Takes

Hot To The Touch