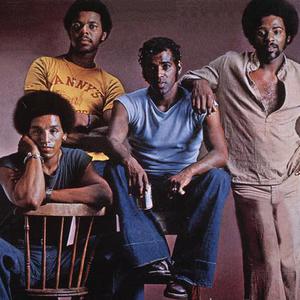 The Real Thing, a Liverpool based vocal group, had its origins in the Merseybeat boom of the 1960s. Lead Singer Eddie Amoo was a former band member of The Chants, whose beat singles gathered considerable critical acclaim, although they failed to chart. After continuing to record for various record labels, the band name was eventually dropped. Re-labelled as The Real Thing, and with brother Chris Amoo, Ray Lake and Dave Smith on board, they got their big break following an appearance on the "Opportunity Knocks" ITV talent show.

Re-labelled as The Real Thing, and with brother Chris Amoo, Ray Lake and Dave Smith on board, they got their big break following an appearance on the "Opportunity Knocks" ITV talent show. Spotted by an ex-Radio Luxembourg DJ, Tony Hall, he played a significant part in their early career development. Even so, success was not immediate, and contracts they signed with a couple of major record labels came to nothing, before signing to Pye Records in 1975. A spell acting as backing singers on tour with David Essex, also helped to increase their profile.

With a song written and produced by Ken Gold and Mick Denne, The Real Thing finally emerged in 1976 when "You To Me Are Everything" sailed up to the Number One slot in the UK singles chart.

It led off a list of nine hits on Pye over a three year period, which included "Can't Get By Without You", and "Can You Feel The Force", both of which were top five success stories.

Their brand of commercial sweet soul music, mixed with disco influences, established their popularity with the British audience. They were the UK's best selling black group of the late 1970s, but a switch to the Calibre record label in 1980 slowed the momentum. Subsequent material fared less well, although remixes of their first two hits charted some 10 years after their original release.

The group, with three of the founder members still on board, continue to perform and record to this day

Chris Amoo is also a regular on the Dog Show circuit, the highlight coming in 1987, when his Afghan Hound, Champion Viscount Grant, was crowned Supreme Champion at Crufts.
Eddie Amoo's early career, in the chants, was supported by a backing band called 'Vince & the Volcanoes', led by Vinnie Tow/Ismail, who was managed and promoted by Mr George Roberts at Liverpool 8, Stanley House, before the chants were, temporarily, backed by the Beatles at the Original Cavern Club. .

Can You Feel The Force

Step Into Our World (Vinyl)

Can You Feel The Force (Vinyl)