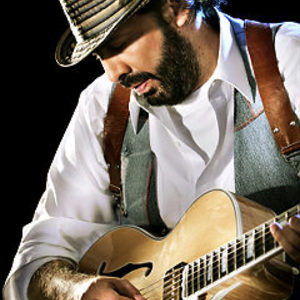 Juan Luis Guerra (born June 7, 1957 in Santo Domingo, Dominican Republic) is the most internationally recognized Dominican singer/songwriter. His pop style of Merengue and Bolero and Afro-pop/Latin fusion have garnered him considerable success outside the Dominican Republic. Juan Luis Guerra is sometimes associated with the popular Dominican music called Bachata, and while this association is partially true, he actually uses the basics of Bachata rhythm with a more bolero feel to the melodies in some of his songs.

But he does not limit himself to one style of music, so he incorporates diverse rhythms like Merengue, Salsa, Balada, Rock & Roll, and Gospel. "Ojal? que llueva caf?" is one of his most acclaimed pieces.

After studying philosophy and literature for a year at the Universidad Aut?noma de Santo Domingo, Guerra switched to the Conservatorio Nacional de M?sica. Guerra was a great admirer, at this time, of the Beatles music.

After finishing his studies at the Santo Domingo conservatory, Guerra went to the Berklee College of Music in Boston to study composition and arranging in 1979.

After his return to the Dominican Republic, he released his first album, Soplando (1984) with a group of local musicians which subsequently became known as Juan Luis Guerra y 440. Note that the band's name in Spanish is officially publicized as Cuatro Cuarenta (Four Forty), a shortening of the normally strict reading of number four hundred and forty. The 440 part of the band's name refers to the standard tuning "A=440." Reportedly the name for the band came from a practice session where Juan Luis's brother suggested the name, because the name would reflect how "in-tune and precise they were."

Their next album, in 1989, brought them international fame. Ojal? que Llueva Cafe (If only it would rain coffee), a slow melodic number with superfast background tracks, became a number one hit in many Latin American countries, with the hit song of the same name. Subsequently, a video of the hit song was filmed and Juan Luis Guerra and his 440 band began touring. (The song's fame was revived in 1996 with a cover by Caf? Tacuba). In 1990, they released their next album, Bachata Rosa, which also became a major hit and earned him his first Grammy award. The album, having sold more than 5 million copies at that time, allowed Guerra to keep touring Latin America, USA and Europe. This album contains memorable love songs such as "Burbujas de amor" (Bubbles of Love), the self-hit "Bachaata Rosa", "Rosalia", "Como Abeja al Panal" ("Like a Bee to the Beehive"), "A Pedir Su Mano" ("To Ask For Your Hand"), "Carta De Amor", and "Estrellitas y Duendes" ("Little stars and elves").

Guerra became a controversial figure in the Dominican Republic after he released his next album, Areito. "Areito" (1992), featured the hit single "El costo de la vida," ("The Cost of Living/Cost of Life") but the video version was banned in several countries.

He protested against the poor conditions in many Latin American countries, the celebration of the discovery of the Americas "(1492)", and the double standard policies of first world nations. ('Areito' is a Tai?no word for song and dance).

That situation might have had something to do with his next album, Fogarat? (1995), where he stayed away from recording any protest songs.

In 2004, Guerra released his first new album in six years. Entitled "Para Ti" (For you), the album's songs are mostly religious in nature, reflecting Guerra's conversion to Evangelical Christianity. With this album the singer won two awards at the 2005 Billboards in the categories of Gospel-Pop and Tropical-Merengue, for the hit single Las Avispas, being this the first time ever that the same song wins these two categories at the same time. Other hits included "Para Ti" and "Soldado" (Soldier). In the same time, Guerra was honored with the Latino Special Award for the Music Academy of Spain for his contributions to the music of his country and the Caribbean in the last 20 years.

Guerra is the uncle-in-law of Miss Universe 2003, Amelia Vega. In January 2006, Juan Luis performed at Berklee's 60th anniversary along with other artist such as Paul Simon, Herbie Hancock, Michel Camilo and Chiara Chivello.

In 2006, he recorded with famous artists Diego Torres in "Abriendo Caminos" and with Man? in "Bendita luz". He has also opened the concert of The Rolling Stones in Puerto Rico and was invited by Sting to sing with him in a concert at Altos de Chav?n, La Romana in Domincan Republic. At the Premio Lo Nuestro awards in 2007, he was given the honorary lifetime achievement award. He also performed the lead single of his new album, "La Llave De Mi Corazon." 2007.

La llave de mi coraz?n has been #1 song In Billboard charts for four consecutive weeks, #1 selling album in Colombia and it keeps climbing the charts in other countries.

He has recorded in English, the song "July 14th" in Fogarat?(1995), and more recently "Medicine for my soul" and" Something good" with Italian singer Chiara Chivello. Some of his songs are both in English and Spanish such as "Woman Del Callao" and "Guavaberry".