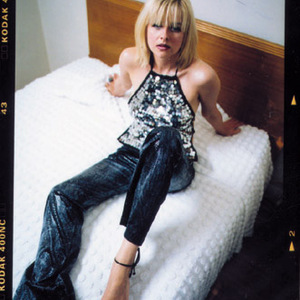 A prolific songwriter/composer, musician and producer, Jo Davidson makes her home in New York City. Formerly signed to Warner Chappell Music Publishing, Jo left WC to form her own publishing company, SIMPLY SAID SONGS. Her music has been featured in film and television, including Felicity, Blossom (sung by Melissa Manchester), The campy cult classic Friends 'Til The End, VH-1, MTV, NBC, OXYGEN Network, Tom and Jerry The Movie (Jo's song "All in How Much we Give" was sung by Stephanie Mills), Along For The Ride starring Melanie Griffith (the song "Ghost town"...

After forming her record company, Fragile Tough Girl Records, Jo began recording her debut CD titled "Fragile Tough Girl." She set up her own recording studio which included her 1929 Steinway grand piano. It was at this point that Jo brought in the help and talents of co-producer and engineer, Greg Ladanyi (Jackson Browne, Don Henley, Fleetwood Mac). Jo wrote and arranged all of the songs, played the piano & keyboard tracks and recorded many of the guitar tracks. String arranger David Campbell (Alanis Morisette, The Goo Goo Dolls) contributed his talents with string arrangements for Jo's two songs "Secrets" and "Tonite." After signing to Edel Records in 2000, the CD was re-titled "Kiss Me There" and was released nationwide in 2001.

"Kiss Me There" was a top 20 Modern AC hit on radio and received nationwide airplay with adds in markets such as WBMX (Boston), WSSR (Tampa), WKDD (Cleveland) and WVRW (St. Louis). During this time,Jo performed at radio shows and festivals along with artists such as Nelly Furtado, Alana Davis, Better than Ezra, The Go Gos, Eagle-Eye Cherry and others artists.

In 2003, Meat Loaf recorded Jo's song "Why Isn't That Enough" on his "I Couldn't Have Said It Better" album.

In 2004, Jo released The Simply Said Sessions, which she recorded in Newport, Rhode Island along with co-producer Steve Rizzo (Kristen Hersh). The Simply Said Sessions is a collection of songs one fan described as "the musical equivalent of Monet's Tiger Lilies." Haunting piano melodies and vignettes, perfect for long drives and rainy days. Featuring a song about 11 September 2001 titled "Bird in the Sky."

Jo has also produced songs for independent artists such as Jenny Bruce and Rachael Sage (the song in which Rachel won the grand prize in the John Lennon Songwriting contest).

To hear a slection of the cd "Kiss me There": http://cdbaby.com/cd/davidson