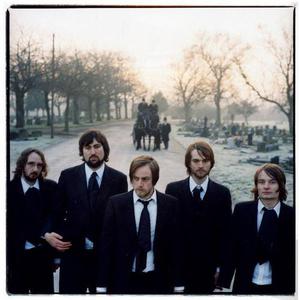 I LIKE TRAINS have flourished within Leeds' fertile music scene since their inception in 2004 and have seen their intelligent, thought-provoking and quintessentially British world embraced by a growing following the world over. The NME descried them as 'brilliant, unique, wry... at odds with pop's present trends.' Uncut Magazine referred to them as ?Bold and Impressive', and the Guardian cast them as ?Intelligent, very dark humorists? grand civic music, less to be listened to and more to be visited like a museum or war memorial, and all the more interesting because of it.

The widescreen nature of their music has found them in demand for film and television soundtracks, their recent syncs include the ever popular CSi: Miami and trailers for Hollywood films The Wrestler, Amelia and Beautiful Boy.

Due for release on May 7th 2012, The Shallows explores our relationships with technology. Set to a dark motorik pulse and haunted by machines, production duties were handed to Richard Formby, celebrated for his work on the Mercury nominated ?Two Dancers' by Wild Beasts. ?The Shallows' deals with themes of information overload, charts a history of how our tools have shaped us, and asks how our recent reliance on digital technology to obtain information has changed the way we think and retain knowledge.

The band released their debut single 'Before The Curtains Close' on the Leeds label Dance To The Radio in 2005. The murder ballad soon sold all 500 copies and was followed by their second single 'A Rook House For Bobby' on Kids. The dramatic tale depicting the life of Bobby Fischer, the troubled chess grandmaster sold all 500 copies in its first week and earned them recognition on the radio and in the press in the UK. Their third single was released in 2006 on Fierce Panda and sold all 1000 copies in its first week. 'Terra Nova' was the story of Captain Scott's doomed 1912 Antarctic expedition set to a sensational orchestra of guitars as grand as the landscape it describes and has earned them regular plays on national radio and glowing reviews. The band's zero-budget animated homemade video re-enacting the last days of Scott and his team has become as popular as the song and received regular plays on MTV2 and even features in a exhibition at the Fram Antarctic museum in Oslo. The summer of 2006 saw the release of the mini-album Progress, Reform on Fierce Panda, which was a catalogue of their recordings to date and was full of the band's unique, beautiful sounds and rousing songs, brimming with exceptional characters and historical events. The songs covered Captain Scott, Hjalmar Johansson, a rejected candidate for the Norwegian Antarctic team; Bobby Fischer, the troubled chess Grandmaster and a reprise to Bobby's political status; Dr. Beeching, who closed many of the nation's railways, and other tales of damned or murderous events.

I LIKE TRAINS' first full length record, Elegies To Lessons Learnt, came in October 2007, released on legendary independent Beggars Banquet. This took the band's historical obsession to its logical conclusion, an ambitious record illustrating how history repeats itself and how the human race fails to learn from its mistakes. It was accompanied by a series of singles which showed that there is always more than one side to every story. Each b-side took up the same story from an alternative perspective.

Following the folding of the Beggars Banquet label, I LIKE TRAINS released an instrumental piece entitled The Christmas Tree Ship EP at the end of 2008 on yet another influential independent label Fantastic Plastic.

Released in October 2010 the album He Who Saw The Deep was the first release on the band's own ILR label. Having successfully secured funding from a loyal fan base via the Pledge Music website, the record marked a new chapter for I LIKE TRAINS. There was a streamlining of their signature dark atmospheric sound. There was light and shade, hope and devastation. Where once, the band had looked to the past for its inspiration, ?He Who Saw the Deep' had its eyes firmly on the future. The album spawned three singles with beautifully shot sea themed videos produced by the Progress Film Company. These were brought together on This Skin Full Of Bones CD/DVD release at the end of 2011. It also featured videos of the band performing stripped down alternate versions of tracks from ?He Who Saw the Deep' in the grand surroundings of Leeds' Left Bank.

A Divorce Before Marriage

This Skin Full Of Bones