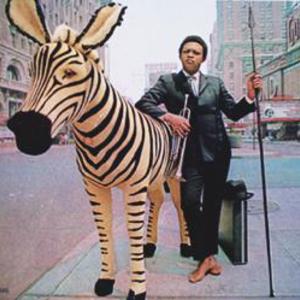 Hugh Masekela (born Johannesburg, April 4, 1939) is a South African flugelhorn and cornet player. In 1961, as part of the anti-apartheid campaign, he was exiled to the United States where he was befriended by Harry Belafonte. He has played primarily in jazz ensembles, with guest appearances on albums by The Byrds and Paul Simon. In 1987, he had a hit single with "Bring Him Back Home" which became an anthem for the movement to free Nelson Mandela. After apartheid ended, Masekela returned to South Africa where he now lives.

Hugh Masekela was an old collaborator of Abdullah Ibrahim. He is reported to have been initially inspired in his musical growth by Trevor Huddleston, a British priest working in the South African townships who financed Masekela's first trumpet. Masekela played his way through the vibrant Sophiatown scene with The Jazz Epistles and to Britain with King Kong, to find himself in New York in the early 1960s. He had hits in the United States with the pop jazz tunes "Up, Up and Away" and the number one smash "Grazin' in the Grass".

A renewed interest in his African roots led him to collaborate with West and Central African musicians, and finally to reconnect with South African players when he set up a mobile studio in Botswana, just over the South African border, in the 1980s. Here he re-absorbed and re-used mbaqanga strains, a style he has continued to use since his return to South Africa in the early 1990s.

In the 1980s, he toured with Paul Simon in support of Simon's then controversial, but highly critically acclaimed, album Graceland, which featured other South African artists such as Ladysmith Black Mambazo, Miriam Makeba, Ray Phiri, and other elements of the band Kalahari, which Masekela recorded with in the 1980s. He also collaborated in the musical development for the Broadway play, Sarafina! He previously recorded with the band Kalahari.

In 2003, he was featured in the documentary film Amandla!, about how the music of South Africa aided in the struggle against apartheid. In 2004, he released his autobiography, Grazin' in The Grass: The Musical Journey of Hugh Masekela, which thoughtfully details his struggles against apartheid in his homeland, as well as his personal struggles against alcohol addiction from the late 1970s through to the 1990s, a period when he migrated, in his personal recording career, to mbaqanga, jazz/funk, and the blending of South African sounds to an adult contemporary sound through two albums he recorded with Herb Alpert, and notable solo recordings, Techno-Bush (recorded in his studio in Botswana), Tomorrow (featuring the anthem "Bring Him Back Home"), Uptownship (a lush-sounding ode to American r and b), Beatin' Aroun' de Bush, Sixty, Time, and most recently, "Revival".

Hugh Masekela is the father of Sal Masekela, host of American channel E!'s Daily 10 show, along with Debbie Matenopoulos.

Grazing In The Grass (The Best Of Hugh Masekela)

The Lasting Impressions Of Ooga Booga