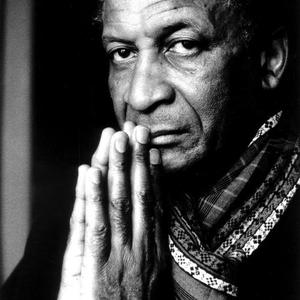 Abdullah Ibrahim (born 1934, Cape Town, South Africa), formerly known as Adolph Johannes Brand, and as Dollar Brand (from a popular brand of cigarettes), is a South African pianist and composer. His music reflects many of the musical influences of his childhood in the multicultural port areas of Cape Town, ranging from traditional African songs to the gospel of the AME Church and ragas, to more modern jazz and other Western styles. He first received piano lessons at the age of seven, was an avid consumer of jazz records brought by American sailors, and was playing jazz professionally by 1949.

In 1959 and 1960, he played alongside Kippie Moeketsi with The Jazz Epistles in Sophiatown before joining the European tour of the musical King Kong.

He briefly returned to South Africa in the mid-1970s after his conversion to Islam (and the resultant change of name from Dollar Brand to Abdullah Ibrahim); however, he soon returned to New York in 1976, as he found the political conditions too oppressive. While in South Africa, however, he made a series of recordings with noted Cape Town jazz players (including Basil Coetzee and Robbie Jansen). This included Coetzee's masterpiece, "Mannenberg", acknowledged by most as one of South Africa's greatest musical compositions; the recording soon became an unofficial soundtrack to the anti-apartheid resistance.

Abdullah Ibrahim has written the soundtracks for a number of films, including the award winning Chocolat and, more recently, No Fear, No Die. Since the end of apartheid, he now lives in South Africa and divides his time between his global concert circuit, New York, and South Africa.

Abdullah Ibrahim is a towering figure in South African music, an artist who brings together all its traditions with a deeply felt understanding of American jazz, from the orchestral richness of Duke Ellington's compositions for big band to the groundbreaking innovations of Ornette Coleman and the 1960s avant-garde.

Ibrahim has worked as a solo performer, typically in mesmerising unbroken concerts that echo the unstoppable impetus of the old marabi performers. He also performs regularly with trios and quartets and larger orchestral units. Since his triumphant return to South Africa in the early 1990s, he has been feted with symphony orchestra performances, one of which was in honour of Nelson Mandela's installation as President. He has also founded a school for South African musicians in Cape Town.

With his wife, the jazz singer Sathima Bea Benjamin, he is father to the New York underground rapper Jean Grae, as well as to a son, Tsakwe.

The Song Is My Story

Mukashi (Once Upon A Time)