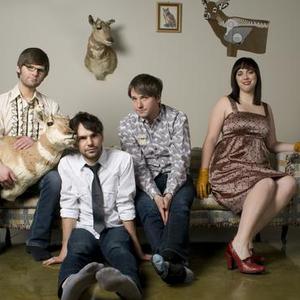 Formed in January 2006, Hot Panda hails from Edmonton, Canada, and was formed after Chris Connelly and Maghan Campbell returned from living abroad in Oslo, Norway. Invigorated by the Scandinavian music scene, the two snatched up Mike Robertson and Keith Olsen and started producing their rowdy mash-up between the UK's pop-loving supergrass, the rawness of Iggy Pop, and the gritty danciness of Ukraine's Gogol Bordello.

If you are reading this, which you are, you are also probably listening to our first ever EP, The Whale Headed Girl' which we recorded in Calgary with Diego Medina of Spanish Jewels productions...You should now be able to pick it up at your local record store, if you live in Edmonton! Anyway right now we've recovered from our very first national tour which included a few dates in New York City and an illustrious opening spot for cheeky brit poppers Art Brut, and an Eastern tour with a slot at Pop Montreal. What a crazy year! We're now demo-ing our little hearts out, getting ready to record our full length, maybe in February? We'll have more info about that soon.

"Hot Panda is a lot of fun, easy to dance to and just might be the latest big thing" -Edmonton Sun