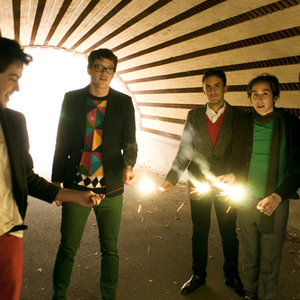 Harlem Shakes, from Brooklyn, NY as we know it was born in 2006, after an earlier incarnation of the band went to college and went nuts. Lexy still sings lead and Brent still plays the drums, but now Kendrick plays keyboard, Jose plays bass, and Todd plays guitar. Everyone sings. Harlem Shakes have toured with Deerhoof, Vampire Weekend, and Beirut, and have opened for Wire, Clap Your Hands Say Yeah, Arctic Monkeys, and various other famous bands with animal names.

After extensive touring and a bit of schooling, the band got back together with Chris Zane (Les Savy Fav, The Walkmen, Passion Pit, White Rabbits) to record their first full-length album, TECHNICOLOR HEALTH, which arrives March 24 from Gigantic Music. The members of Harlem Shakes have been obsessed with pop music their whole lives, and they have great faith in its power to make people feel a little better about things, and to say something vital and, inshallah, maybe even enduring.