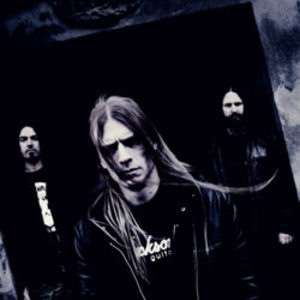 There are several bands which go by 'Grave' 1) Grave is a death metal band from Visby, Sweden. One of the longest-running Swedish death metal bands, Grave has created a sound and style which has been an inspiration on a number of the genre's more promising younger outfits. Having started out as a band called Corpse in 1986, they released loads of demos before their legendary 1991 debut Into The Grave.

1) Grave is a death metal band from Visby, Sweden. One of the longest-running Swedish death metal bands, Grave has created a sound and style which has been an inspiration on a number of the genre's more promising younger outfits. Having started out as a band called Corpse in 1986, they released loads of demos before their legendary 1991 debut Into The Grave.

"Into the Grave" established Grave as one of death metal's most brutal new hopes, and its release was ensued by a host of live performances across Europe and America.

1992's You'll Never See, the band's critically-acclaimed second release, showcased their growing musical talent with a cleaner, stronger sound which appealed to a wider audience while retaining the group's trademark heaviness. Unfortunately, it was also the first album without the bassist Jonas, who'd left Grave several months earlier as a result of his increasing dislike for the touring lifestyle. After unsuccessfully trying to fill the slot, the group made a collective decision to revert to their original three-man line-up, with the guitarist J&ouml;rgen Sandstr&ouml;m switching to bass.

In the late 1993, Grave released ...And Here I Die...Satisfied, a limited edition EP featuring brand new, rare and remixed tracks encompassing the band's entire recording history. The EP paved the way for the release of the trio's long-awaited third full-length offering.

Soulless was recorded during the early part of 1994 at Stockholm's Sunlight Studios (just as all of the group's previous releases had been) with the producer Tomas Skogsberg. Manifesting a more mature musical stance than in the case of Grave's previous efforts, "Soulless" pleased the band's longtime followers while expanding the group's appeal to non die hard death metal audiences.

In 1996, Grave came back with another attack of their relentlessly brutal yet catchy material in the shape of Hating Life. Produced, once again, by Skogsberg at his Sunlight facility, the album featured a vocal debut of the guitarist Ola Lindgren, who took over the function following the departure of Sandstrom. Proving that they haven't softened their stance a bit or altered their focus on writing songs that hit hard and leave a lasting impression, "Hating Life" will surely please anyone who is into music that's equally treacherous and tuneful. Grave toured both around the States and Europe to promote this album.

After the last tour the band had a loooooong break until 1999 when they decided to play together again. Rehearsals went pretty slow at first but after a while they got the old bassplayer Jonas Torndal to join the band once again, this time to grab the second guitar. The bass job went to an old friend of the band Freddan Isaksson who had played with numerous Stockholm based bands, the most known to you being Therion. The band played their first live gig in 5 years at HardRock cafe.., Stockholm. Following that gig, rehearsals continued and in the spring of 2002 the new album Back From The Grave was recorded at Sunlight studios in Stockholm. Released in September that same year the album featured a bonus disc with 3 classic Grave demos from 1988-1989.

After touring with the likes of Immolation, Goatwhore and Crematorium through North America, a headlining European tour with The Forsaken and Disinter, then followed by a slot on the tour with Exodus, God Dethroned, Nuclear Assault and Agent Steel, it was time to set to work on the next album enitled Fiendish Regression. The sixth album in the history of Grave was recorded with Coercion-Member Pelle Ekegren on drums, adding a more vivid and relentless groove attack to the classic Grave song-structures. Two European tours followed:one headlining and one as part of "The Domination Tour", alongside Cryptopsy and Aborted.

Back in Sweden, Grave entered Studio Soulless to record their newest malevolent creation As Rapture Comes. To cement the albums mix, the band returned to Peter T?gtgrens Abyss Studio (Dimmu Borgir, Immortal). The new album delivers the bands famous relentless death-groove in a well-elaborated combination with clearly increased aggressive bite and superior dynamics in their own songs. The album also includes a heavy cover version of Alice in Chains classic song Them Bones.

The 7:th Grave album "As Rapture Comes" was released by Century Media records in July 2006. Featuring everything between the brutality of "Into the grave" and the groove and heaviness of "Soulless" this one is certain to please anyone into true oldschool deathmetal.

The Enraptured Dvd was recorded in Poland Aug 2006 and features all 16 live tracks from that show. Bonus tracks are 2 songs filmed at Party-San festival 2004 and also the Soulless videoclip which actually is the only video that Grave has ever produced. It also includes interview, biography, discography and tons of photos. They really wanted to add a lot more bonus material from old gigs and tour rarities but unfotunately there were legal matters concerning the rights to that material which could not be solved in time for the release. However, they are already planning for another Dvd which definately will contain all of that stuff...

Two tours followed the release of As Rapture Comes. First an eastcoast US tour together with long time friends Dismember and Vital Remains, then a slot on the highly anticipated Masters of Death European tour which featured Entombed, Unleashed, Dismember and Grave. In May 2007 another European tour was launched, this time together with Immolation and Krisiun. Summer festivals and also a revisit to Mexico after 14 years was completed before it was time to start the process for the 8:th studio album scheduled for release in May 2008.

Dominion VIII was the first album released under swedish label Regain Records, after 15 years of working with Century Media rec's the band chose to switch label since their original 1991 contract was finalized. Once again recorded at Studio Soulless and returning to their roots "Dominion VIII" is a heavy, brutal, straigh forward oldschool release which shows Grave at their best.

Out of Respect for the Dead

The Dark Side Of Death

And Here I Die Satisfied