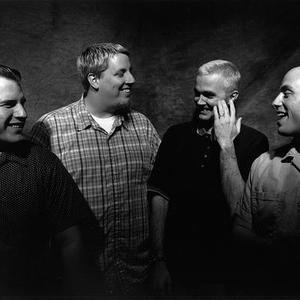 Stavesacre is a Southern California-based rock band that, despite some key lineup changes and the vagaries of the music business, has endured for more than a decade. The band's first three albums sold a combined 90,000 copies, and has often been referred to by industry insiders as "the best band you've never heard of." Stavesacre debuted in 1996 with the album Friction. The band's tough, hard rock sound and the very strong, distinctive voice and lyrical work of vocalist Mark Salomon immediately gained Stavesacre a very strong and devoted following.

Stavesacre debuted in 1996 with the album Friction. The band's tough, hard rock sound and the very strong, distinctive voice and lyrical work of vocalist Mark Salomon immediately gained Stavesacre a very strong and devoted following. The band continued on with two more exceptionally well-received studio albums, Absolutes and Speakeasy, on Seattle-based Tooth & Nail Records. During this period of time the group was associated with the edgier side of the contemporary Christian music scene. But dissatisfaction with what the band saw as hypocrisy in that industry led to a well-publicized break from the scene in 2000. Stavesacre released a split EP with Denison Marrs in 2001 on Velvet Blue Music which featured three new songs and then released Collective, a retrospective best-of/outtakes collection, to complete their contract with Tooth & Nail.

In 2002 Stavesacre signed with the independent Nitro Records and released (st?vz'?'k?r), with producer David Bianco at the helm. The band's first three albums were produced by Bryan Carlstrom. Many fans were adverse to the change in production values, and opinion was split regarding the band's shift to a more melodic, less aggressive sound, marking (st?vz'?'k?r) as a somewhat polarized release. Regardless, the change did little to bring Stavesacre into the mainstream limelight. The band then sought release from their contract, and went fully independent. 2002 saw the release of a live DVD of a show recorded in Dallas, Texas as well as the limited-edition four-song Bull Takes Fighter EP, which many dedicated fans hailed as a slight return to form but which was not widely known about.

In 2005 the band signed with Abacus Recordings, an imprint of Century Media Records, and recorded its fifth full-length studio album in Los Angeles with producer Matt Hyde. Titled How to Live with A Curse, it was released on April 18th, 2006. While, again, the album was seen by many of the remaining fans as a strong and triumphant return to the scene, it seemed that Stavesacre's luck had run out; the album failed to gain back much of the limelight in which the band had played during the 90s, and in early 2007 they announced on their Myspace blog that the band was finished. The announcement, however, bore good news as well: Stavesacre would return to the studio with original guitarist Jeff Bellew (praised for the harder sound of Stavesacre's first two albums) to record one last album, and a career-spanning retrospective DVD would be made as well, in the fashion of former label-mates Zao's double DVD set "The Lesser Lights of Heaven".

The name "Stavesacre" is derived from the stavesacre plant, which is poisonous and used as a parasiticide. Its seeds are known to induce vomiting.

Against The Silence (EP)

How To Live With A Curse