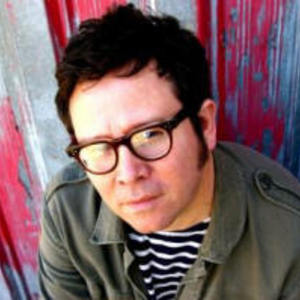 Grant-Lee Phillips (born Bryan G. Phillips, September 1, 1963) is an American singer-songwriter and multi-instrumentalist. He is probably best known as the voice and vision of the critically-acclaimed group Grant Lee Buffalo, which existed from 1992 to 1999. Grant is also seen regularly in the television series Gilmore Girls as Star Hollow's local busker. He does not sing his own songs on the show - mostly covers of other musicians; usually in the background as the main characters are passing.

Phillips spent his formative years in Stockton, CA, where he founded a band called Bloody Holly, but prior to his 20th birthday Phillips headed to Los Angeles to study film, and he quickly found himself beneath the spell cast by local bands as The Rain Parade and Dream Syndicate. Phillips soon joined with Stockton acquaintance Jeff Clark to form Shiva Burlesque. The band dissolved after two critically acclaimed records, and Phillips soon began writing and demo-ing using the Grant Lee Buffalo alias.

Following some solo dates, Phillips invited former bandmates Joey Peters and Paul Kimble to join him, and the trio signed to Warner subsidiary Slash in 1992. Phillips' golden, honey-soaked voice went largely to waste in Shiva Burlesque, but the new band enabled him to step out as a singer/songwriter and multi-instrumentalist. GLB went on to release four very different LPs, consistent in excellence. A cult following, successful tours, and across-the-board critical acclaim (he was voted Rolling Stone's Male Vocalist of the Year following their second LP) didn't translate into sales, however. Frustrated with his label's dead-on-arrival promotion, Phillips asked for his band to be released from their contract, and he was obliged. (It was erroneously reported that GLB had been dropped.) Phillips dissolved his band, anxious to forge a new path.

In October of 1999, he headed to Jon Brion's studio and recorded a handful of new songs, played exclusively by himself. Dubbed Ladies' Love Oracle, it was self-released the following year online and at his numerous appearances at Largo in Hollywood. After landing a deal with Zoe/Rounder, Phillips issued the excellent Mobilize in 2001. The next year, Rounder reissued Ladies' Love Oracle in time for Phillips' joint tour with Kristin Hersh and Joe Doe. In 2004, he released Virginia Creeper, followed by an album of covers (Nineteeneighties) in 2006. Strangelet appeared in 2007 on Rounder Records.

All That You Can Dream

Lightning, Show Us Your Stuff

Walking In The Green Corn