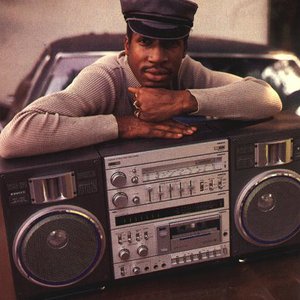 Grandmaster Flash (born Joseph Saddler on January 1, 1958 in Barbados) is a hip hop musician and DJ; one of the pioneers of hip-hop DJing, cutting, and mixing. Saddler's family migrated to the United States, and he grew up in the Bronx. He became involved in the earliest Queensbridge, New York DJ scene, attending parties set up by early luminaries. Learning from Pete Jones and Kool Herc, he used duplicate copies of a single record and two turntables but added a dextrous manual edit with a...

Saddler's family migrated to the United States, and he grew up in the Bronx. He became involved in the earliest Queensbridge, New York DJ scene, attending parties set up by early luminaries. Learning from Pete Jones and Kool Herc, he used duplicate copies of a single record and two turntables but added a dextrous manual edit with a mixer to promote the break (a point of isolated drum rhythm) - the ordinary playing of the record would be interrupted to overlay the break, the break could be repeated by using the mixer to switch channels while the second record was spun back. The speed and dexterity needed showed why Saddler was called Flash, although he got the nickname in school due to the fact that he hung around with another guy named Gordon (from Flash Gordon). He also invented the technique initially called cutting, which was developed by Grand Wizard Theodore into scratching (AMG).

Flash played illegal parties and also worked with rappers such as Kurtis Blow and Lovebug Starski. He formed his own group in the late 1970s, after promptings from Ray Chandler. The initial members were Cowboy (Keith Wiggins), Melle Mel (Melvin Glover) and Kid(d) Creole (Nathaniel Glover) making Grandmaster Flash & the 3 MCs. Two other rappers briefly joined, but they were replaced more permanently by Rahiem (Guy Todd Williams, previously in the Funky Four) and Scorpio (Eddie Morris, also used the name Mr. Ness) to create Grandmaster Flash & the Furious Five. Soon gaining recognition for their skillful raps, Grandmaster Flash & the Furious Five pioneered MCing, freestyle battles, and invented some of the staple phrases in MCing. They performed at Disco Fever in the Bronx beginning in 1978.

Signed to Sugar Hill Records in 1980 by Joe Robinson, they released numerous singles, gaining a gold disc for "Freedom," and also toured. The classic "The Adventures of Grandmaster Flash on the Wheels of Steel," released in 1981 was the best display of their skills (combining elements of Queen's "Another One Bites the Dust", Chic's "Good Times" and samples from Blondie's Rapture), but it was their least successful single at the time. The group's most significant hit was "The Message" (1982), which was produced by in-house Sugar Hill producer Clifton "Jiggs" Chase and went platinum in less than a month. Flash sued Sugar Hill in 1983 over the non-payment of royalties, and in 1984 the group split between Flash and Mel before disintegrating entirely. Flash, Kid Creole and Rahiem signed to Elektra Records while the others continued as "Grandmaster Melle Mel & the Furious Five." (Mel notably appeared on Chaka Khan's I Feel for You). They reformed in 1987 for a charity concert, to release one album and then fall apart again. There was another reunion, of a kind, in 1994, although Cowboy died in 1989 from a drug overdose due to the effects of his crack cocaine addiction.

The Bridge (Concept Of A Culture)

The Official Adventures Of

What's The Matter With Your World (CDS)

U Know What Time It Is (CDS)