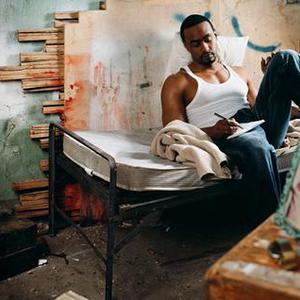 Before Governor, there was none. The streetwise southern gentleman who constantly refers to himself as "country boy" is, without question, in a lane that is all his. A lane paved by his silver tenacity, golden delivery and platinum presence. There was absolutely no way that the man born Governor Washington wouldn't make it; it was just a matter of time. It started in Charles City, Virginia, when a young and eager Governor graduated from high school.

It started in Charles City, Virginia, when a young and eager Governor graduated from high school. Although Governor, who is thoroughly proficient at playing the saxophone, trumpet and percussion, was accepted into the much-coveted Berklee College of Music, he opted to form an R and B outfit a la Jodeci, named Case Closed. Yearning for success, the group headed to New York City. Unsurprisingly, their quest was unfortunately short-lived. The group disbanded, and Governor went back to Virginia.

Built for combat, the resilient Governor quickly returned to the Big Apple hoping to get a bite of the action this time. Action, though, was slow to materialize. In the meantime, Governor turned to nine-to-fiving and hustling to stay afloat. He eventually caught a break with indie cornerstone, Warlock Records, who via a production deal eventually released his debut, "Another State of Mind" (2000).

Back on his grind, in 2002, Governor eventually landed himself in the company of esteemed producers/executives, the Trackmasters. By this time, Governor had altered his groove from the orthodox R and B delivery employed on his Warlock release, tapped into his hip-hop influences and came up with his now unmatched style. Governor recorded an appreciable amount of songs with the Trackmasters, most notably, the intoxicating "My Life," featuring 50 Cent-who was at the time also signed to the Trackmasters. In fact, Governor and 50 recorded about six songs together for a prospective album they tentatively named "Best of Both Worlds."

Not long after Governor and the Trackmasters decided to go their separate ways, he was introduced to his business partner "Haitian" Jacques Agnant and his cousin, producer Wyclef Jean. The two hit it off right away. Governor appeared on a Clef-produced song on Santana's "Shaman" (2002) and his "Preacher's Son" album (2003). Clef was indeed also responsible for Governor's signing to Atlantic Records. He walked Governor into renowned music executive Craig Kallman's office, who in turn wasted little time in signing the young phenom immediately.

While completing the recording process for Atlantic, Governor received a call from the legendary Dr. Dre, who expressed his staunch interest in producing six songs for Governor's major label debut. He flew to Los Angeles where he ended up recording over a dozen scorchers with Dre. Akin to a Rhodesian cheetah's pace, the news of a historical joint venture between the good doctor's Aftermath imprint and Atlantic Records spread through the industry. Unfortunately the industry red tape got the better of the situation-Governor's work with Compton's finest is, to this day, very unlikely to see the light of day.

Rather than backing down and counting his losses, the Virginia country boy reloaded and teamed up with Grand Hustle, the Atlanta-based label owned by Atlantic recording artist T.I. and his business partner Jason Geter, through a joint venture with Atlantic. "Grand Hustle gives me a direct connect to a million people," he says. He met with the former at the recommendation of Kallman, and the two immediately hit it off. Governor was confident their new alliance would help him bring his exquisite sound to lovers of both R and B and hip-hop alike.

Governor's debut for Grand Hustle/Atlantic Records, "Son of Pain," blasts off with the touching "Blood, Sweat and Tears." From the beginning, it's clear that this blessed son of Virginia isn't here to play; he means business. Just the way he rides the Trackmasters' well-manipulated sample (last heard on Ed O. G and Da Bulldogs' "I Gotta Have It") perfectly illustrates what he means by "putting the Blues back in Rhythm and Blues." But it's not only the execution that deserves enthusiastic applause; it's also the ingenious way he packs in the verbosity of his lyrics without spilling past his boundaries.

Governor labels his unique musical blend "Soul Folk." "Folk music is about the story and the message," he reveals, in his characteristic animated and passionate tone. "Soul music is about the feeling. R and B is so dead; I don't even want to consider myself R and B. Everybody wants to dance for massa. I don't dance, I boogie."

Throughout the feast that is "Son of Pain," we are treated to poetically charged songs of pain, joy, indulgence, relationships and triumph. An avid and resourceful storyteller, Governor--who wrote every song on his album--takes us on an engaging excursion that is as exciting as it is fulfilling. "Music is a vehicle for saying something," he explains. "It is an art. We already know what hustling's about... the street life. There's a whole other spectrum that our people don't talk about. Artists take their power for granted. At the end of the day, what you leave here when you go is more important than what you did."

Mirroring his personality, Governor's music manages the feat of being conscious without the pretentious airs that are usually associated with it. On "Be Yourself" a jeep banger with a bounce that conjures Compton, Governor, with the pious conviction of a southern minister, charges us to indulge in self-love and self-acceptance.

The fabric that makes up Governor's style and delivery as a "hip-hop soul singer" is marvelously groundbreaking in that, unlike those before him who only evoked the sensibility and perhaps attitude of hip hop, Governor also diligently channels the cadence, prose and the subtlest inner workings of it. He doesn't rely on hip-hop as a crutch for his vocal shortcomings, far from that. He is as proficient a singer as they come. For as much as Governor embodies the swagger of his favorites Whodini and Jay-Z, so does he conjure the spirit of his idols Curtis Mayfield, Sam Cooke and Gil Scott Heron. "I try to create timeless music but still incorporate some hint of the current era I'm in. Everybody that's young wants to be old, and everybody that's old wants to be young," explains Governor. "I'd never go back though and listen to an O'Jays joint and try to switch the vibe from it and roll with it. That vibe is already in my blood. I was born with that."

Indeed, the beauty of Governor's style is the fact that his influences have organically seeped into his very breath and step.

"Out Of My Hands" showcases this exquisitely unique dynamic perfectly. Over Eddie Scoresazy's cinematic track, Governor, combining his church-boy roots with a b-boy swagger, kicks a narrative about cutting all ties with a wayward lover (Not even the coldest night in September/Can make April showers bring May flowers"). On the sultry, mid-tempo mannish hit "Slow Down," Grand Hustle beat-smith, Khao lays gyrating, guitar-led bedding for this country boy to sink his lecherous teeth into. And on the sparse, rum-infused Studio One-sounding "Move Easy," he engages in trying to serenade a femme fatale. Star producers Scott Storch ("Destiny"), Wyclef Jean ("Make Love To You"), Raphael Saadiq ("Never Wanna Leave") and Just Blaze ("That's Right"), among others check in to pay their respect to the landing of a special talent who's been a long time coming.