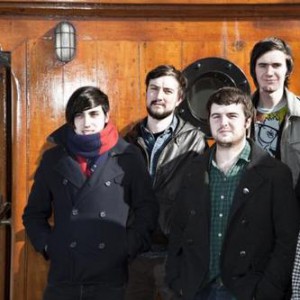 Abbott is proud to be Scottish and his accent is to the fore in his singing, contrasting magically with the Northumbrian tones of Sarah Hayes, the second vocalist.

Their sets go from simple voice and guitar compositions (?Four Bulbs'), through stomping Wilco-esque tunes to riotous cacophonies of white noise; their songs about alienation within relationships and youth itself are sung and screamed with utter abandon while the band work themselves into a furious frenzy?
?A thrilling, cathartic experience? Sub City Radio.

Fyfe Dangerfield of the Guillemots has supported and lauded this exceptional band since their formation, personally asking for them to open for the Guillemots in Glasgow and Edinburgh on their 2007 Scottish tours - and it's easy to see why.

With the King Tut's ?Your Sound? artist of the month award, a stonking four track demo, a Connect festival appearance and an acclaimed December ?Live at the Mill? headline slot at Oran Mor in Glasgow and The Caves in Edinburgh under their belts, 2008 was a year of quiet, confident progression for the band, whose original 5 piece line up has now been augmented by Tom Stearn on guitar and vocals.

Still known as Brother Louis Collective, the band released their debut single ?These Barren Years? with B-Side ?Gypsy Girl? co-produced by Jim Neilson (Glasvegas engineer) on EUPHONIOS RECORDS in March 2009, with launch gigs at Oran Mor, Glasgow, and The Doghouse, Dundee plus an Avalanche In Store to boot.

The band's 7th April headline gig at Nice ?N Sleazys got a 5 star review in The Sunday mail of 12 April. They were also recently crowned the Scotsman's Under The Radar band of 2009.

In July 2009 the band headlined the Sunday night T Break stage at T in the Park and later that month recorded their first album ?Boots Met My Face? at Chem 19, with UK Music Producers Guild ?Breakthrough Producer of the Year 2010? Paul Savage at the controls, supported by The Scottish Arts Council and under the guidance of Robin and Jim at Lo-Five Management (Trashcan Sinatras, Jo Mango, El Dog).

2010 sees the new name Admiral Fallow and the new album ?Boots Met My Face?. This will be released in the UK on 27 April 2010 on Lo-Five Records, preceded by the single ?Squealing Pigs? on 05 April. The band will be played with King Creosote at the Fence Collective's Homegame Festival on 14 March, are touring the UK in the first 2 weeks of April and supporting the Futureheads in Glasgow on 29 April.

?(their) brooding, heartfelt folk leanings are bolstered by a soundtrack of colourful orchestration, including flute, strings and double bass - a rich concoction that has caught the attention of more than a few unsuspecting ears.? The List

"They did not so much ?take to the stage' as colonise it and build a mini empire of sound for the awestruck concert goers...surely one of the truest new talents in Scotland today."**** New Found Sound

?This works well when the band are singing open-hearted love songs and impressively conjuring a balance of nostalgia and innocence-breaking violence during ?Subbuteo'? The Scotsman