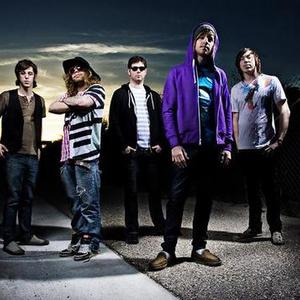 In a world where perception usually trumps reality, here are some cold, hard truths about the band Four Letter Lie: Hailing from Minnesota, the four members of Four Letter Lie-- singer Brian Nagan, bassist John Waltmann, drummer Derek Smith and guitarist Connor Kelly--had only been together a short while before they cut their own EP, sold 1,500 copies of it and drew raves in the press. "This release from Minnesota?s Four Letter Lie sums up everything that we've become familiar with in melodic hardcore, and does it perfectly," raved AMP Magazine.

The guys have been touring on their own since the band's inception; in 2005, they landed choice slots on the Warped and A Taste of Chaos tours?the latter tour invited them back in 2006. With their scream-along choruses, monster breakdowns, and unexpected, yet well balanced soft side, Four Letter Lie have built a dedicated, and loyal local fan-base from the ground up as well as a strong nationwide audience.

So it should come as no surprise to find out that Four Letter Lie was one of the four featured unsigned bands in January?s issue of Alternative Press Magazine, and was selected by fans to perform for the second year in a row at Taste Of Chaos. ?We have always been a band who works as hard as we can at what we do and I think that?s something people start to notice after awhile,? Skaff adds. Victory Records sure took notice, as they snapped them up in 2006 and sent them into the studio with producer extraordinaire Michael Birnbaum and Chris Bittner (Coheed and Cambia, Straylight Run, The Sleeping). ?Recording with Michael and Chris was probably one of the most exciting things we have experienced thus far as a band,? says Waltmann. ?A lot of bands we are influenced by have spent time in that studio.?

Recording at Applehead Studios in Woodstock, NY, offered its own special rewards. ?Working in Woodstock was a good place for us to get away and really devote ourselves to this record,? Smith notes. ?Being surrounded by all of the rock history built in Woodstock was an inspiration for all of us.? ?Everything seemed to click in the studio,? Waltmann affirms. ?We were surrounded by a peaceful environment and the record felt completely natural, that?s when we knew we had achieved what we were going for.?

Their achievement is Let Your Body Take Over, a wondrous collection of songs that run the gamut from seething rock chaos and unbridled emotions to sweet pop and clever wordplay. The fun starts with the first single ?Feel Like Fame? and it doesn't let up from track one to twelve. ?We have the passion and drive in our music and ourselves to constantly be striving for more,? Brian Nagan. ?We hope for people to recognize these traits and relate to what we're trying to portray to them.?

Don?t lose sight of this band, as it's readily apparent that the best is yet to come. As Nagan concludes, ?We try to work together collectively 110% in everything that we do and so far it?s leading us in a positive direction."

What A Terrible Thing To Say

Let Your Body Take Over