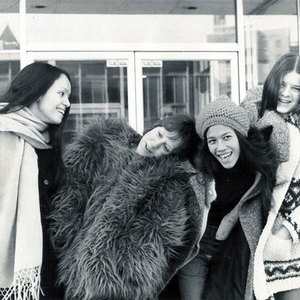 There are 5 artists/bands with the name Fanny: 1. Formed by two Philippines-born-California-raised sisters, guitarist June Millington and bassist Jean Millington - the group, initially known as Wild Honey, was completed by drummer Alice de Buhr and keyboardist Nickey Barclay. (A famous rumor to the contrary, the name Fanny was not given to them by George Harrison, but selected by the band members.

1. Formed by two Philippines-born-California-raised sisters, guitarist June Millington and bassist Jean Millington - the group, initially known as Wild Honey, was completed by drummer Alice de Buhr and keyboardist Nickey Barclay. (A famous rumor to the contrary, the name Fanny was not given to them by George Harrison, but selected by the band members.) Supporting themselves for years by gigging at bars, clubs, fraternities, and armed forces bases in the late '60s, opening for such bands as The Doors, Fanny were signed to Reprise Records in 1969 after a concert at the famed Troubadour club in Los Angeles.

Fanny were influenced by The Beatles, Cream, Badfinger and Little Feat (whose leader, the late Lowell George, would become one of the band's most trusted friends). Producer Richard Perry (known for his work with Carly Simon) would oversee the band's first three albums, including Fanny Hill, notable for having been recorded at London's Abbey Road studios with Beatles engineer Geoff Emerick. Fanny's final album for Reprise, Mother's Pride, was produced by Todd Rundgren.

Fanny began his musical career in the 1980s at the end of the British punk rock explosion, playing guitar for bands in Edinburgh. He used influences from The Banshees to Def Jam, Stravinsky to P-Funk. This playing style brought him to the attention of local punk rock legends The Exploited, whom he joined in 1993. Frasier toured Europe and South America as guitarist of The Exploited and is featured as "The Human Bone" on the Live In Buenos Aires concert tape. He also co-wrote and recorded the "Beat the Bastards" LP but quit the band before the album was released, so he wasn't credited for it.

Frasier left Scotland to play in the Canadian funk rock band Bootsauce and moved to Montreal. Afther the band fell appart Frasier stayed in Winnipeg. By this time he was tired of guitars and rock and having new musical ambitions and visions he returned to the sampler experiments that he first began in the eighties. He traded in his guitars for synths and a PC and released a house CD titled "Come and Get It Up Yer".

When he met Aaron Funk Frasier discovered a new musical direction and changed his musical direction towards breakcore. Weekend trips to Wisconsin and the legendary barn parties in East Troy pushed him further in this direction. It was there that he met Destro from Zod record and Eiterherd from Widerstand and plans were made to release his new tracks.

3. Fanny (Fanny Hamlin) is a Swedish artist formerly of the pop group Play, she recently released the single 'Come To Me' produced in collaboration with Stockholm duo Montauk. She is currently working on her debut album due for release in the spring of 2012.

5. Fanny is the artist representing France at the Eurovision Songcontest 1997, singing "Sentiments songes" at the age of 17.

She has been singing professionally since she was eight. At the age of 12 she started recording with EMI, while working with Jean-Jacques Soupley. Her first album, launched after a TV appearance when she was 12, quickly went to gold. Two years later came her second album, Fanny.