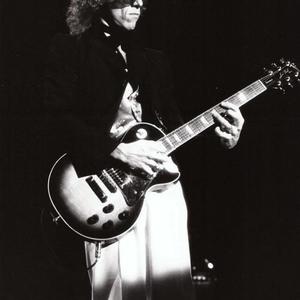 Bob Welch (August 31, 1945, Los Angeles, CA - June 7, 2012, Antioch, TN) was an American singer, songwriter, and guitarist, best remembered for his time with the immensely successful rock band Fleetwood Mac and for his own platinum solo albums and top-ten hits such as Sentimental Lady and Ebony Eyes from his album French Kiss on Capitol Records. Welch started his career with a show band, the SEVEN SOULS, playing night clubs around the country.

Welch started his career with a show band, the SEVEN SOULS, playing night clubs around the country. Las Vegas lounges, and chic European resorts after having a Top-20 hit on the L.A. R&B charts. While living in Europe , where he was majoring in French at the Sorbonne, he was chosen to fill the guitar spot in Fleetwood Mac . He flourished with the band as a songwriter and guitarist, and wrote and sang 22 of the 50 songs on five albums.

This led to Welch hosting his own pre-MTV syndicated weekly music variety TV series Hollywood Heartbeat for Gold Key Media. His two-hour live TV musical special, "BOB WELCH AND FRIENDS" was an MTV first. He continued on, recording more solo albums for RCA Records, and the worldwide sales of Welch's Fleetwood Mac and solo career record output continued to soar into the tens of millions.

During his career as a solo artist, Welch received numerous awards including BILLBOARD'S "FAVORITE DEBUT ARTIST" AWARD and the NORTH AMERICAN ROCK RADIO'S "#1 POP SINGLE NEW MALE ARTIST" AWARD, as well as playing in front of the largest rock concert audience ever (over 300,000 people) at CAL JAM II. Both RHINO RECORDS and CURB RECORDS have recently released collections of Welch's solo material, and FLEETWOOD MAC has released a 25th anniversary boxed set, "THE CHAIN," which includes some of Welch's work with that band, as well as re-releasing on CD all his former recordings with FLEETWOOD MAC.

Welch helped found AFTRA'S "SINGERS NIGHT" at the famous BLUEBIRD CAFE, when he served on the their Board of Directors. He is currently a member of ASCAP (32 years), NSAI and is a voting member of NARAS. Bob's songs have been cut by SAMMY HAGAR, POINTER SISTERS, BRUCE CHANNEL, DON NIX, and most recently, by KENNY ROGERS. Bob has had his material used in HBO movies, like "TOUGH AND DEADLY," and one of his compositions is featured in the DREAMWORKS/STEVEN SPIELBERG production directed by CAMERON CROWE, "Almost Famous."

Welch has music compositions with various production music libraries such as DSM Producers in New York.

As an endorsee of GIBSON guitars, Welch performed at guitar clinics at different cities in the area, such as Chicago, Memphis, and Birmingham. Welch was one of the first on-line interviews and one of the first endorsees for COMPUSERVE'S MUSIC FORUM, Bob performed on the "FIRST VIRTUAL GUITAR LESSON" on CD ROM in conjunction with Gibson guitars for COMPUSERVE MAGAZINE. He continued to do the multiple interviews and rock bios for TV networks like the DISNEY CHANNEL and the BBC.

Welch received an award from A.S.C.A.P commemorating over 25 years of consecutive airplay for his compositions "SENTIMENTAL LADY and HYPNOTIZED"

In 1999 Welch released a new CD , "Bob Welch Looks At Bop", a tribute to the "BE BOP" music of the 1940's. He also wrote a column for the music professionals website and magazine "ARTISTPRO.COM", and is an audio consultant for A.M.D computers and for STEINBERG Gmbh, the audio production specialists.

Welch died on June 7, 2012 of an apparent suicide. He had been having health issues prior to his death.

His Fleetwood Mac Years And Beyond Two

Live From The Roxy

His Fleetwood Mac Years And Beyond