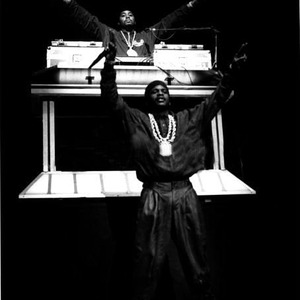 Eric B. & Rakim were a hip-hop duo composed of DJ Eric Barrier and MC Rakim Allah (born William Michael Griffin Jr.). Hailing from Long Island, New York, the pair is generally considered by hip hop enthusiasts to be one of the most influential and innovative groups in the genre. During hip hop's so-called golden age of the mid-1980s to the early 90s, the duo was almost universally regarded as the premier MC/DJ combo in hip hop.

The two had a potent chemistry and each represented the height of innovation in their respective roles: Rakim was the master lyricist, an innovative talent who pushed the art of hip hop lyricism to new creative heights with his use of internal rhyme, sophisticated metaphors, and with a methodical-yet-effortless delivery; the duo's beats built on the hard-hitting sound of Run-D.M.C. by adding James Brown samples and Eric B's extensive scratching skills, setting the stage for hip hop's late-1980s/early-1990s infatuation with samples from the Godfather of Soul.[1]

20Th Century Masters (The Best Of Eric B & Rakim)