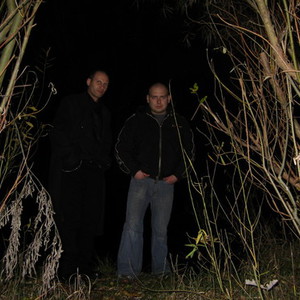 1) Already established producers in their own right, the collaboration of Perc & Giorgio Gigli as Endless takes the distinctive sound of each producer and creates something far more than a simple fusion, forming a sound that is alien to either producer's solo work. Endless is inspired by the more hypnotic and psychedelic forms of techno. The middle ground where drone & ambient music meets techno.

Endless is inspired by the more hypnotic and psychedelic forms of techno. The middle
ground where drone & ambient music meets techno. Giorgio Gigli being directly influenced by his love of Brian Eno, Byetone and Robert Henke whilst Perc seeking for sounds of Irdial and Ifach when they started to work on the pool of sounds. Each track built upon the classic rhythms of early analogue drum machines, opening up the minimalistic aesthetic that runs through Giorgio's tracks whilst smoothing some of the abrasive qualities that make Perc's percussive storms so recognizable.

The ?Area' EP is starting off with ?SG8? a crafted bass drum formed and fused with hypnotic drones creating a deep helical groove. ?00165? on the heavy side a track shifting and shaping in a never ceased to please tension in sound and space. ?EHDC? impresses with its sublime phonic density and tight bass drum sounds. True to the Electric Deluxe philosophy each of the tracks is accompanied with a tool giving digital DJs advanced possibilities of improvisation; easy to blend yet with distinct features.

With further tracks still to emerge no one is sure where this collaboration will head next, but one clue may lie in their soon to be unleashed performances showcasing a fusing of live and DJing, analogue and digital. With both producers have already proven themselves as accomplished DJs, their forthcoming performances, like their tracks will be something to savour. On his own Giorgio has two EPs on Zooloft plus a remix for Mikrowave coming soon. Whereas Perc is about to release his debut album for Perc Trax.

Modern crossover-metal band from Ostrava with gothic and doom influences from their past.

The band ENDLESS was founded in Ostrava, the Czech Republic, in 1994. Since that time ENDLESS released these four records: ?Perihelion? (1999), ?Vital No.1? (2001), ?Perfect Message? (2003), ?Refuse to shine" (2008). This band has played plenty of gigs among others with such big names as Anathema, The Gathering, Opeth, The Haunted, Cradle Of Filth etc. Most music reviewers describe creation of ENDLESS as art-metal imitatinevess combined with vital emotional capacity or as remarkable alternative of 21. century metal music. This band is for its atmosphere and flamboyance offen links to the famous groups like Fear Factory, Anathema and Pink Floyd. ENDLESS is also double-winner of the Czech Grammy Awards in Hard 'n Heavy category that the band got for the albums ?Vital No.1? and ?Perfect Message?.


2) Endless was a short-lived underground Romanian hip-hop group based in Ia?i. Formed in 2007, as a duo, Endless quickly gained a cult following helped by their edgy lyrics and sick beats. Cherquem and Uzzymeiter, the two members of the group, launched a series of singles that propelled their career in the area of their city, soon gaining momentum for their highly accusative content and rebellious attitude that brought Cherquem under the public scrutiny. Al-coholic and DJ PatRush became full members of the group during the same year, helping Endless to explore new, slightly darker lyrical themes and create a full bass pumped sound inspired by the grime wave coming from London. Like every great thing, Endless lasted for a glimpse, ending their careers in 2008 after a heavy publicised scandal between the musicians. Cherquem decided to close his famous P?curari studio, throwing out all his equipment, destroying it like a true rockstar during his last performance in front of a mad crowd that took over the city of Ia?i after the concert, vandalising Jewish shops and public monuments. Dubbed by the Romanian media as the White NWA, Endless left behind one of the best hip-hop albums of the last decade, "Ciorapul flau?at", and a magnificent story that still has its mysteries.

In the beginning of 1995, Sergio Sanchez (drums), Gustavo Di Padua (guitar and vocals) and Criss Moura (guitar) quit their old band called Shout to start a new musical journey. They found Endless. The band begins to make several gigs in its city, Rio de Janeiro. At this time Gustavo was singing and playing guitar. Endless starts to get many fans with its beatiful and inspired songs. One of this fans was a great bassplayer called Rey Araujo. He starts to rehearsal with the band. At the same time, Gustavo felt that singing and playing at the same time was getting too hard to handle. He could do better by focusing only on the guitar. Endless was in need of a frontman to enhance its songs. In the end of the same year, the singer Vitor Veiga is called by Gustavo to take the role of the frontman. In 1996, Endless records a demo tape called "Dreams". This demo calls the midia atention despite this poor sound quality. Three songs were recorded: Lines of the time, Forbbiden Desist and Land of my eyes. In the next year, the band feels the necessity of a keyboard to expand its music and Marcio Brito takes the place starting a new Endless' era. In 1998 July, by wining a musical contest, Endless gets the opportunity to record its first single cd. This work was called "Violent Sky" and the band gets the attention of the midia again with other three songs: Eternal Winds, Keep your ways and Minstrels of Dawn. All this attention results on the record sessions of the album Eternal Winds on 2000 August by the label Megahard Records. But Gustavo was out the band by personal problems. Flavio Legala take the place of Gustavo but he left the band soon after a gig on the city of Sorocaba, Brasil. Leo Monteiro takes the Endless' guitars together with Criss Moura. Rey Araujo is replaced by Felipe Ximenes, a personal friend of Leo Monteiro in October 2002. The album is very searched by the metal fans of Brazil and other countries like Holland, Portugal, Italy and Germany. Between June 2000 and July 2002, Endless makes two great gigs with Primal Fear (2000) and Angra (2002) in Rio de Janeiro. But some internal problems would cause the dissolution of the band in 2002. Marcio Brito is the first member to leave the band and is replaced by Felipe Avilis in 2001. Felipe Avilis quit the band in April 2002 leaving the place to Rodrigo Carriee. Criss Moura is replaced by Gustavo Di Padua, who returns to the band in 2001. Before it occurs, Gustavo was working on a new project with Vitor and Sergio called Illusions. Endless is over in July 2002 when Sergio Sanches leaves the band. The singer Vitor Veiga becomes a member of Aquaria and releases the album Luxaeterna in 2005 at the same time that he carries his old project out. Illusions was consisted by the rest of Endless' members: Vitor Veiga, Gustavo, Rodrigo Carriee, Leo Monteiro and Felipe Ximenes. Leo Monteiro quits Endless in 2003 by some personal problems and disagreements with the rest of the band.

Line Up on some of the most important gigs:

In 2005 August, Vitor Veiga quits Aquaria by disagreements. He reunites Endless to release the album called "A Dream At The Sun" that was recorded a little time before of Aquaria's Luxaeterna. But early in 2007, both Vitor and Gustavo are called to work with Aquaria.

4) ENDLESS is a Japanese rock band formed by two D?SIRE ex-members, SHIGE and TETSU. Their official website: http://www.modernbeat.net. Other tag you may use: ???????

5) Endless is a norwegian rapper.

6) Endless is a Gothic Rock band that contributed the track "Desire to Rule" on "The Gothic Grimoire Compilation 3".

7) Endless was a Massachusetts straight edge band from the early 1990's.

8) A collaboration between techno producers Perc and Giorgio Gigli.

9) Endless was a death/doom band from Canada.

The Truth, The Chaos, The Insanity

A Dream At The Sun

the Republic of Heaven

With Everything Against Us