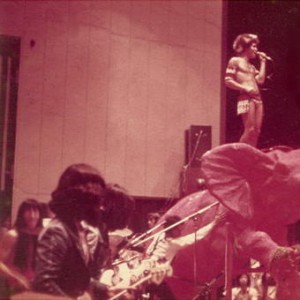 The band was initially organized by Japanese entertainer and entrepreneur Yuya Uchida as The Flowers, a cover band, and featured two vocalists - male vocalist Yuya Uchida, and female vocalist Remi Aso, who was touted as the Japanese version of Janis Joplin. Their first album consisted of covers of Western pop songs. It was primarily notable for the fact that all of the band members appeared nude on the cover, including Aso, which was considered scandalous at the time. However, after the "Flowers" album, Uchida lost interest and Aso drifted away.

Meanwhile, Hideki Ishima and Joe Yamanaka bumped into each other in Shinjuku after departing from their respective GS bands (Hideki from The Beavers, and Joe from Four Nine Ace) and decided to start a band together. The result was a blues band called Mystic Morning. Uchida attended one of the concerts and decided to pick the two up for a new project which he wanted to be an "international group, one that could have appeal outside Japan."

Their first full-length release, Anywhere, was composed entirely of covers. Among them is the first known cover of Black Sabbath.

Uchida decided to pair vocalist Joe Yamanaka and guitarist Hideki Ishima with keyboardist Kuni Kawachi, resulting in the album Kirikyogen (Often mistaken/mislabeled as "Kuni Kawachi and Flower Travellin' Band" and the circulated bootleg "Music Composed Mainly By Humans"). The track Music Composed Mainly By Humans would re-appear re-recorded/re-arranged as a single (A split with Machine-Gun Kelly), as well as a bonus track on some releases of Satori as Map.

1971 brought their most popular and critically acclaimed release: Satori. They recorded Satori in two days (one day recording, one day mixing).

In early 1973, they were billed to open for the Rolling Stones, but Mick Jagger's visa was rejected from a previous drug conviction and all concerts were canceled. Later that year the band broke up, with Yamanaka going on to release various solo albums.

Guitarist Hideki Ishima released a solo album, One Day, in 1973, and continued a career as a studio musician, guesting on several of Yamanaka's solo albums. Ishima is still active in the music scene in Japan, and specializes in playing the "sitarla," an instrument he designed. The sitarla combines the qualities of a semi-hollow body electric guitar and the sitar. He released a collection of material recorded at home using Logic entitled BGM in 2006.

In recent years, Flower Travellin' Band has been rediscovered by the heavy metal, stoner rock and doom rock movements in America and England, and are often cited as influential by bands involved in these movements.

Yamanaka continues to be popular in Japan as a solo artist, and celebrated his 60th birthday in 2006 with a tour and the release of a live DVD, Joe's Bag. He continues to perform Flower Travellin' Band songs as part of his live show.

* Challenge (Under the band name "Yuya Uchida and the Flowers"(1969)
--Only two members (George Wada and Jun Kobayashi) of Flower Travellin' Band are present on this release, in addition to producer/musical director Yuya Uchida.

*From Pussies To Death In 10,000 Years of Freak-Out [Bootleg] (1969)
--A bootleg released under the Flower Travellin' Band name, despite having the same line-up as The Flowers (sans Remi Aso).

* Satori (Canadian Version) (1972)
--Only some tracks from the original Satori are present on this release. They are re-mixed to dull-down the harshness of Joe's vocals and Hideki's guitar. Several tracks from Made In Japan are also present, as well as the sitar-laden "Lullaby," which is sung in Japanese.

* Make Up (1972)
--A double album consisting of both live and studio recordings. Augmented by keyboardist Nobuhiko Shinohara.

* Hibiya Open Air, Japan, 1972 [Live Bootleg] (1972)
--An audience recording of their performance. Tracks from Satori and Made In Japan are present, as well as renditions of You Shook Me and How Many More Times, and some improvised jamming.

* We Are Here (2008)
--The first release from the reunited group. This time without producer/musical director Yuya Uchida.

Made In Japan & Satori

From Pussies To Death In 10,000 Years Of Freakout