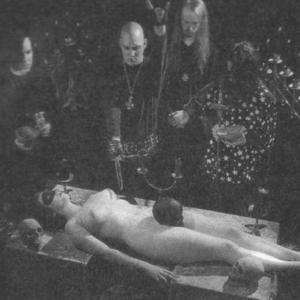 The Electric Hellfire Club is an industrial metal band mixing elements of glam metal, techno, gothic rock, psychedelia, black metal lyrical themes and experimental noise. The band also makes use of sampling, mainly from grindhouse horror films and criminal documentaries.History Based in Kenosha, Wisconsin, the Electric Hellfire Club was formed in 1991 when Thomas Thorn (aka Buck Ryder), departed the industrial/techno band My Life With the Thrill Kill Kult.

Based in Kenosha, Wisconsin, the Electric Hellfire Club was formed in 1991 when Thomas Thorn (aka Buck Ryder), departed the industrial/techno band My Life With the Thrill Kill Kult.

The EHC toured extensively throughout the early to mid 1990's, both as an opening act, and as headliners in their own right. Among the bands they toured with are: Type O Negative, Christian Death, Spahn Ranch, Penal Colony, and Genitorturers.

On January 22, 1996, Shane Lassen was killed in an automobile accident. After the death of The Rev. Dr. Luv, the band regrouped and recorded the album Calling Dr. Luv, dedicating the title track, a cover of the KISS song from which Lassen drew his stage name, in his honor.

After recording Calling Dr. Luv, the band began extensive touring again, setting out on the road with legendary noise musician Boyd Rice. During this period of near-constant touring, the band toured with such acts as Type O Negative, Danzig, Coal Chamber, GWAR, Powerman 5000, Fear Factory, Godflesh, and played one-off shows with Spahn Ranch and Goth legends Alien Sex Fiend. Before setting off on tour with GWAR in the summer of 1997, the band entered the studio and recorded the single "D.W.S.O.B", which appeared on the soundtrack to the 1997 film Gummo.

Following the completion of an extensive tour in 2002, the band entered a period of extended hiatus. Numerous rumors of new tour dates and studio material, including a DVD, have surfaced since then, but other than a cover song of Metallica's "Devil's Dance", released through the band's website in early 2004, no such activity has come forth. On the message board of the then-official website, the band blamed the growth of peer-to-peer file sharing for harming its sales. Guitarist Ricktor Ravensbruck stated on the website that the band's record sales had been affected to the point that he could no longer earn a living solely from them.

2005 saw the band scatter, and enter a period of hiatus. Frontman Thomas Thorn relocated from the band's native Wisconsin to the Florida Keys, and Sabrina Satana relocated to Los Angeles. The official website went offline, and the official message board was taken down as well. 2005 and 2006 saw no official activity from the band. In 2007 a new official website appeared at electrichell.net, and the band's page on the website myspace.com began receiving updates. Information on the website and myspace page indicated that the band was regrouping and possibly working together again, and that Wilhelm Curse had resumed keyboarding duties for the band. Throughout mid to late 2008, the band began releasing demo versions of previous songs, and other rare recordings via their page on myspace.com. These tracks were/are available for streaming, and are changed on a semi-regular basis. This is to date, the only instance that the band has officially made available material from the 1991 demo album; entitled "12 Songs From Hell".

Early 2009 brought about the reactivation of the band in earnest. In January it was reported at electrichell.net and on the band's MySpace page that preliminary work had started on a new full-length album, which would mark the band's first studio album in seven years. It also saw Charles Edward from the Denver area gothic rock band Seraphim Shock join the band as guitarist, replacing long time band member Ricktor Ravensbruck. Original drummer Eric Peterson rejoined the band in February, reuniting half of the band's original lineup.

The band has undergone many changes in membership, with only frontman Thomas Thorn remaining throughout its history.

A fan and convicted murderer Caleb Fairley attended an Electric Hellfire Club concert on September 10, 1995 in Philadelphia, PA. The same night he killed Lisa Manderach, her baby daughter Devon, sexually assaulted the mother and dumped their bodies in nearby Valley Forge National Park. At that show its is believed that Fairley asked then keyboardist for the band, Shane Lassen, if he could help him "in establishing a more personal relationship with Satan".

Empathy For The Devil CD2

Empathy For The Devil CD1