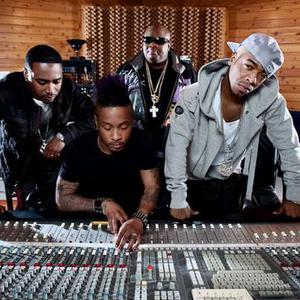 Dru Hill is an American singing group, most popular during the late 1990s, whose repertoire includes R&B and soul music. Founded in Baltimore, Maryland and active from 1992 to 2005, Dru Hill recorded seven Top 40 hits, and is best known for the R&B #1 hits "In My Bed", "Never Make a Promise", and "How Deep is Your Love". Tamir "Nokio" Ruffin was the group's founder and leader; his bandmates included main lead singer Mark "Sisq?" Andrews, Larry "Jazz" Anthony, and James "Woody" Green.

Signing to Island Records through Haqq Islam's University Records imprint, Dru Hill released two successful LPs before separating for a period from late 1999 to 2002, during which time Sisq? and Woody released solo albums. In 2002, by then part of the Def Soul record label, the group reunited and added fifth member Rufus "Scola" Waller to the lineup for their third LP, Dru World Order. Dru Hill recently reformed and plans to release a new album, Indrupendence, which will harbor songs like "Get Loose" and "If You Fall" that can now be heard on www.myspace.com/indrupendence. The new album will not include Woody or Scola, but will include new group member Tao. Tao won a spot in the group after winning a competition by singing a transcendent version of Stevie Wonder's "Lately." Tao's audition can be seen on www.druhillonline.com.

The Best of Dru Hill