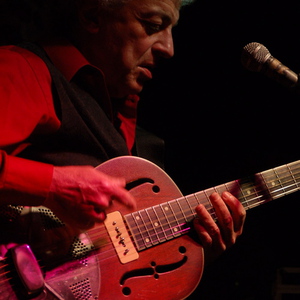 Doug MacLeod is one of the last remaining bluesmen who learned from the old masters, lived the music, survived the life and carries forward that valuable tradition. Within the blues world, MacLeod is known for his superb songwriting, guitar wizardry, warm soulful vocals, wit and unforgettable live performances. At the heart of this is his knack for storytelling, bringing characters?from the faceless to the legendary?to strikingly real life.

?My name is Doug; my formal name is Douglas,? MacLeod yarns, telling about when his mentor George ?Harmonica? Smith recorded a spoken intro for ?It's the Blues,? (from MacLeod's 1984 debut No Road Back Home). ?He couldn't?wouldn't?say ?Doug.' I don't know why. He always called me ?Dubb.' And then when he got mad at me, he called me ?Dubblass.' ?[For the recording] I would say, ?Hello, George? and he would say, ?Hello, Dubb.? And I'd say, ?We'd sure like to hear you play some blues,? and he'd say, ?Okay, I'll blow some blues for ya.?

When they hit the button, what came out of Smith's mouth shocked everyone. ?Everyone stopped and said, ?What?! What did you say, George?' And he said, ?I called him Doug.'? Asked why, Smith replied, ?Well that's his name, isn't it? And his mama's gonna hear this record, and every mama should be able to hear her son's name called right.?

That was Smith's last recorded performance, and stories like these make up MacLeod's own tale. (Ask him about the compliment he laid on Big Mama Thornton back in ?72!) Befitting of a storytelling troubadour Doug isn't entirely sure where he spent his first nine years. Alas, he knows how they were spent.

As a youth, MacLeod overcame inexpressible abuse and a crippling stutter by turning to the blues. ?I had it really rough,? he says. ?I don't remember much, but the product of that was a terrible stutter. Honestly, I couldn't speak two words. I felt that I wasn't gonna be able to speak. And then I picked up the guitar, and I just tried to sing?and this voice came out. I really haven't stuttered much since.? Healing music indeed!

While he developed his rich, soulful voice MacLeod also worked out a unique, unorthodox and powerfully rhythmic acoustic guitar style. Tempered by his early years as a blues bass player and honed by his subsequent journeys into jazz and electric blues. His distinct style of playing was a byproduct of pent-up rage from his turbulent childhood and the segregation drama in his new home of St. Louis. From childhood, early adulthood and into his Navy years, MacLeod picked fights to purge hostility. Eventually he channeled it through his National guitar, using his relentless right hand to pound out an insistent, churning beat to complement his intricate bottleneck and fingerstyle technique.


MacLeod's playing landed him sideman gigs with Smith, Big Joe Turner, Pee Wee Crayton, Eddie ?Cleanhead' Vinson, Lowell Fulson and Big Mama Thornton. Under their tutelage, he learned how to thrill and enrapture a crowd. As he began playing shows solo and with the Doug MacLeod Band, he became a master at moving crowds to dance as much as stop short to soak up his songs and the engaging, entertaining stories behind them?which, as MacLeod says himself, ?Make ya think I been reading your mail.?

Over 24 years, 12 studio albums, several live records and two DVDs, MacLeod has consistently earned raves, with the likes of Honeyboy Edwards saying, ?Now there's a man who can really play the blues.? His songs have been covered by Albert King, Albert Collins, Coco Montoya, Joe Louis Walker and Eva Cassidy, and featured in many TV movies and the hit show In the Heat of the Night. Blues luminaries Charlie Musselwhite, Carey Bell and Janiva Magness have graced his albums.

In every note he performs and records, MacLeod subscribes to the mantra learned from legendary country bluesmen Ernest Banks who instilled in him to ?Never play a note you don't believe? and ?Never write or sing about what you don't know about.?

From 1992 to 1994, he hosted The Blues Highway, a weekly four-hour radio show for EuroJazz. From 1999 to 2004 he hosted Nothin' But The Blues, a marathon 10-hour weekend blues show on Los Angeles' KLON-KKJZ. He has also been the voice for The Blues Showcase on Continental Airlines and contributed his soulful slide playing to the Los Angeles opening of the August Wilson play Gem of the Ocean. And for the past nine years, he's penned ?Doug's Back Porch,? a regular feature in Blues Revue Magazine in which he shares his humorous and insightful stories with thousands of blues fans.

In April 2006, MacLeod released his third album for Black and Tan Records, Where I Been, as well as the instructional DVD 101* Blues Guitar Essentials on Solid Air/Warner Bros. In April 2007, Black and Tan released the live concert DVD The Blues in Me. This summer, the label releases his lucky 13th album, The Utrecht Sessions. Recorded in the Netherlands over three days in February 2008, is largely just MacLeod, his trusty National Delphi guitar?affectionately called ?Spook,? an old 12-string Stella on its last legs, and a creaky chair. Absent all else, save spare percussion and double bass (courtesy Arthur Bont and Jasper Mortier, respectively), the record resonates with MacLeod's essence, stories and playing, punctuated by his tireless right hand and tappin' left foot.

Like the old masters who taught him, MacLeod's music expresses life and times via an intangible, elusive quality that may simply be a keen sense of what matters most. By telling the stories of his life, MacLeod also mythologizes our own existences, allowing us to live vicariously through folks who've done extraordinary things but are really no different from us?even legends get the blues. Which, MacLeod is likely to say, is ?a whole other story.?