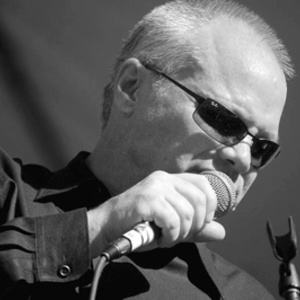 There is a moment on Curtis Salgado's new Shanachie Entertainment CD Strong Suspicion (March 23, 2004) where it seems the spirit of Al Green has possessed him. When Curtis takes on the obscure Beatles gem "I'll be back" and gives it the full-on Memphis Soul treatment, the results are spine-tingling and eerily reminiscent of Al Green's exquisite soul-i-fication of the Bee Gees and Bob Dylan. Curtis' interpretation of "I'll be back" is one of many highlights on Strong Suspicion, his latest tour-de-force amalgam of blues/soul/rock'n'roll.

With the added bonus of great guest performances from slide guitarist Sonny Landreth and singer Bekka Bramlett, it's the strongest effort yet from the man the Los Angeles Times said "is keeping the classic flame of soul music alive."

As always, Curtis Salgado's take on soul music is wide-ranging. His heartfelt approach to the music has won him starring roles as lead singer in bands led by such starts as Robert Cray and Santana. The late John Belushi was so inspired by Curtis that he developed his Blues Brother character after him. Curtis' take on soul is simple. "If a song is sincere and you believe it, that's soul," he says. "To me Pavarotti is as much a soul singer as Otis Redding; Merle Haggard and Hank Williams are soul singers as much as Sam Cooke. Soul is about heart and about belief."

"I'll be back" has been one of my favorites since growing up with The Beatles as a kid. That particular tune was not in the film A Hard Day's Night but is on the soundtrack album. After listening to O.V. Wright and Al Green and how they do a Dylan tune, I thought, why not put a Memphis spin on this? What would Al Green or O.V. Right do with this?"

While Strong Suspicion features other examples of Curtis' ability to put an original spin on someone else's song (most notably the Bill Withers song "Who is he (and what is he to you?)," the new album showcases Curtis' growth as a songwriter. A special highlight is the Prince-like ballad "Inside my heart" while another is the title track. "I wanted to make a greasy Black Crowes/Stones type of thing because I love rock'n'roll! It was Willie Barber who had the concept of that song and he said to me, see what you can do with it.

"'Money must think I'm Dead' has a melody that I've had in my head a long time. I wanted an Albert King meets a Jonny 'Guitar' Watson or War type of vibe. Lyrically it's about being flat busted and having your head just above water to make ends meet. It's about barely having enough to survive and needing more because you are striving to get what it takes to keep your romance alive."

Curtis Salgado's music is so compelling because it comes from the heart. "I've learned a lot of lessons about songwriting. You can't sit around and wait for the muse to hit you. You've got to write. If you read a lot, like I do, an idea hits you. It's getting better each time I approach it."

Not only does Curtis step forward as a singer to reckon with on Strong Suspicion, but he also asserts himself as one of the best harmonica players on the scene. Check out his playing on such stand-out songs as "Money must think I'm dead," "Who is he?" and "Don't wait until tomorrow," among other songs.

Produced by Curtis' long-time producer Marlon McClain (who had success recently with solo recordings by The Gap Band's Charlie Wilson) the new album showcases Curtis' acutely expressive vocals which confirm his status as one of America's outstanding singers in the realm of blues, rock or soul. Louisiana icon Sonny Landreth's amazing slide-guitar work graces three songs; "Give me patience, "Don't wait until tomorrow," and the title track, while Bekka Bramlett's powerhouse duet with Curtis on "Can't stop lovin" is a treat; she's usually lending her voice and songwriting skills to the likes of Faith Hill, Delbert McClinton and Mick Fleetwood among other superstars.

"Sonny Landreth is incredible," says Curtis Salgado. "I saw him when I played Mountain Stage and was just stunned. I said I gotta have this sound on my record. He could hear on his own exactly what were after. Shane, my manager, brought up Bekka. I had seen Delaney and Bonney (Bramlett, Bekka's parents) as a kid. I'd never seen anything like it: A true rock & soul revue. In Bekka possesses that same kind of magic. In the studio she kept throwing out ideas and every time she did she was right on pitch, even off the top of her head."

While Curtis has been a Northwest-music legend from his Portland base ever since his six year stint in Robert Cray's band (he's on Cray's debut album), it's only been in the past few years that national audiences have been seeing what all the fuss is about as Curtis and his band deliver one of the most powerful live shows you'll see anywhere - a rare commodity these days. Curtis' singing ability was recognized at an early age, when he came home from kindergarten one day with a note from his teacher pinned to his shirt saying that he could sing. He started his own band in the burgeoning Northwest blues scene in the early seventies then was key part of Cray's formative years, leaving to front the respected Roomful Of Blues from 1984-1986. Along the way, he inspired John Belushi to create the Blues Brothers when Belushi was in Eugene, Oregon to film Animal House and caught Curtis' act. Belushi dedicated the first Blues Brothers album to Curtis. There was even a stint as lead vocalist with Santana in 1995.

Curtis kicked off his own recording career with Curtis Salgado and the Stilettos in 1991, following it up with More than you can chew in 1995. While both albums generated substantial rock and blues airplay, unfortunately both labels went out of business before he could break through nationally. The more acoustic Hit it and quit it scored him a spot with Steve Miller on Late Night with Conan O'Brien. His three albums for Shanachie (Wiggle outta this, Soul Activated, and now Strong Suspicion), combined with consistent national touring, mark the first time that Curtis has had the benefit of consistent career development with the same record company and booking agent. He's appeared on NPR's Mountain Stage, been the highlight of major festivals across the country and has been winning long-overdue critical raves indicating that he really is one of the great performers on the scene today. Curtis' last CD, Soul Activated, was received with critical acclaim and even garnered a WC Handy Blues Award nomination in the category of "Soul Blues Album of the Year."

Curtis Salgado is finally poised for the break through that seemed to be his destiny early on. For the first time, all the pieces are in place for an artist who has paid his dues, made his mistakes, and had his share of bad breaks but has persevered.

"Music is an offering and if you accept that offering, there's a connection there, and that is what soul is all about," says Curtis Salgado. "This album is the most satisfying record I've ever made. We rehearsed and just went in and played our asses off. We had fun. It's an offering until the next one comes along!"

More Than You Can Chew