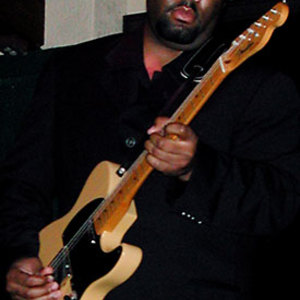 A life changing experience then occurred at the age of twelve, whereby an impressionable young Kirk witnessed multiple awe-inspiring performances at the Long Beach Blues Festival in 1988. Observing Albert Collins, Bobby ?Blue? Bland and the Staple Singers on stage that weekend forever cemented Fletcher's desire to pursue music and ultimately head down his chosen path of the blues.

It was Al Blake, frontman of the Hollywood Fats Band, who began mentoring the burgeoning guitarist in the mid-90's. Through him Kirk met legendary guitarist Junior Watson, and later Kim Wilson, which led to a call to join Wilson's Blues Revue just in time to record the 2001 Grammy nominated album ?Smokin' Joint.? Wilson later repaid the favor appearing alongside vocalists Janiva Magness and Finis Tasby on Fletcher's Delta Groove debut ?Shades Of Blue,? which was officially released here in the U.S. in November 2004. From there Fletcher's career blossomed; he spent three years on the road with Charlie Musselwhite, followed by another stint with Wilson in The Fabulous Thunderbirds, during which time he still found opportunities to record on albums by Lynwood Slim, The Mannish Boys and The Hollywood Blue Flames. In 2007 Fletcher followed his heart and stepped down from his role in the T-Birds, realigning his sights on performing his own music and reigniting his solo career.

"Fletcher clearly has ensemble dynamics down, suggesting that his years as a sideman have been fruitful. But he's also unabashed as a bandleader, and his guitar work earns its prominence." - Blues Revue Magazine

"Kirk Fletcher is a young man with a big reputation... he exudes class and style, knows all the classic licks but never resorts to mere copying, always with his own take in his trick bag." - Blues & Rhythm Magazine
http://kirkfletcherband.com

Heartache By The Pound