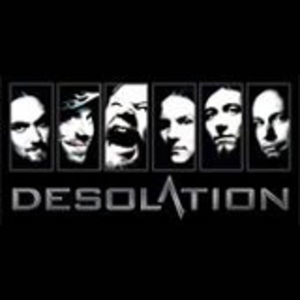 2) A depressive black metal band from the United States. www.myspace.com/farbeyondthecosmos

3) Biography
Desolation was founded by drummer Thomas Nagel and the guitar players Nicolas Marochow and Felix Hanisch near Hannover, Germany in 1994. The line-up was then completed by Torsten Sander and Johannes Bergmann (both on vocals), Kai M?hlenbruch (bass) and Lydia Herrmann (keyboards). 1997 saw the first line-up change with the replacement of Lydia with Sebastian Thomas, who immediately took up his share of songwriting duties.
While recording the band's debut CD ?Call The Storm? during the fall of 1999 Desolation had to part company with Torsten, as he and the band had grown apart musically. Fortunately it didn't take long to find a more than adequate replacement: The band quickly realized that keyboard player Sebastian, even though he had never been a singer before, definitely was the right man for the job.
Kai was getting more and more absorbed in his guitar wizardry and this resulted in spending more and more time with his other band Galloglass. We all agreed that it would be best for him to move on and focus on what he does best and so he left Desolation in 2002 without hard feelings on either side. For a few months, the band replaced him with Henning Pfeiffer, but due to his involvement in two other bands and the HuntingGround Studio, Hannover, he had to leave the band because he wasn't able to put in enough time and effort. Thus, Desolation is presently without a bass player. In September 2004 Nicholas went to the USA for a semester, with Kai replacing him in our first major Tour with God Dethroned and Fallen Saints. For a while, Kai remained a silent partner after this substitute effort. However, as of 2005 he's once more playing bass at all concerts.

discography
In the winter of '96/97 Desolation recorded their first demo tape with the help of Willi Herrmann and Claus Feldmann (Kick-Studio), now also available on CD.
In'99 the band started recording their debut. ?Call The Storm? was recorded on many bleak fall days in the SMR-Studio (now HuntingGround) in Hanover and was produced by Carsten Frank and Desolation. In 2004 Desolation joined forces with AOP Records, giving the band free and full-time access to a recording studio. In 2006 Desolation released their second album ?Under Pitch-Black Skies?.

music
The style the band had found with their first output has been consistently developed, delving into new extremes of aggressiveness and detail and resulting in a multiple-layered sound experience full of contrasts: Terse riffs, powerful drumming, both beautiful and brutal keyboard sounds and a variety of vocal styles are characteristic elements in Desolation's sound that never fail to impress ? whether on stage or CD.

lyrics
Lyrically, Desolation is far removed from the genre-typical clich?s. Vocalist Johannes' intense and personal lyrics reflect the sometimes melancholic, but never negative character of the music and leaves room for interpretation ? just as very different beings can meet in the music of Desolation.

3) A deathcore band from the central coast Australia founded by ex bound by shadows band members. They currently released a demo and is available for free download. At http://rapidshare.com/files/377249732/Desolation.7z