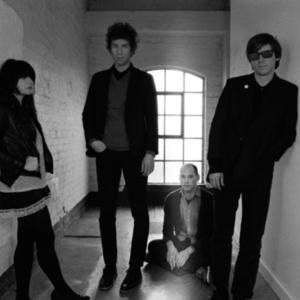 Crystal Stilts is a Brooklyn, N.Y., quartet. Its sound -- equally droll, moody and buoyant -- has roots in early '80s Manchester pop as well as in minimalist garage-rock acts. The band has drawn comparisons to Interpol, Joy Division and early The Jesus and Mary Chain -- with whom it also shares a penchant for stand-up drumming in the manner of The Velvet Underground's Maureen "Moe" Tucker. Formed in 2003 by Brad Hargett and JB Townsend, they released one single and an EP.

Later the pair expanded to five members (Kyle Forester, Andy Adler, and Keegan Cooke) before signing to Slumberland Records in the US and Angular Recording Corporation in Europe and releasing their critically acclaimed debut, "Alight of Night", in 2008.

In Love With Oblivion