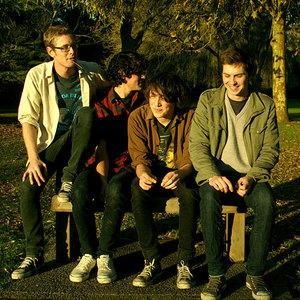 Surf City first came in to existence when bored friends Davin Stoddard and Josh Kennedy met at a party in Mt Roskill, Auckland, New Zealand in 2004. Tired of the heavy avant-garde music that was prolific at the time Stoddard and Kennedy teamed up with Josh's brother Jamie and Logan Collins to form the band. Originally called The Fibs and then Kill Surf City their fascination with fast guitar pop and the early '80s sound of Dunedin soon saw them develop their own unique and catchy sound.

Known as Kill Surf City, they have since shortened their name to just Surf City. As the name is a throw back to an old Jesus and Mary Chain B-side a couple of other bands in America and the UK had adopted the same alias. With the likelihood of overseas travel in the future and to avoid subsequent confusion the name was changed.

Following a couple of tours of New Zealand, numerous day jobs and several flat evections Surf City are to release their debut self titled EP on Arch Hill Recordings on August 6th 2007. The majority of the six song EP was recorded in 2006 in various lounges and bedrooms around Auckland. Some in Eden Terrace and Kingsland and most of the vocals at Davin's mum's place. After the mixes were finalised by Murray Fisher, Davin hunted out infamous American artist Steve Keene to produce the EP's artwork. Keene has created paintings for bands like the Silver Jews and Pavement and was more than happy to design for Surf City. With the direction of ?chickens, guns and the desert' Keene has created a perfectly colourful haphazard scene.

Subsequently climbing to the top of college radio charts, 2009 and 2010 then saw them play SXSW and CMJ music festivals. They have since been signed to Pop Frenzy in Australia, and Fire Records in the US. Their debut LP 'Kudos' was released to acclaim, in September 2010.

?It seems like decades since any New Zealand band has managed to evoke The same feeling that The Clean and Straightjacket Fits did. Mix that with how you feel about Interpol and maybe Sonic Youth and you have a fair idea.'
Pavement

?Their live shows fluctuate form raucously fun to fantastically loose. That genuine vulnerability and intensity is what makes them engaging not to mention entertaining.'
Rip It Up

We Knew It Was Not Going To Be Like This