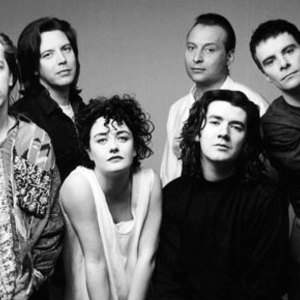 Deacon Blue are one of Scotland's most popular pop bands. The name of the band is taken from the title of a Steely Dan song, whose lyrics seem to reflect the Scottish band's early outlook: They got a name for the winners in the world I want a name when I lose.... Call me Deacon Blues [1] Formed in 1985, this predominantly Glaswegian act were one of the top-selling UK bands of the late 1980s/early 1990s. The group's members were Ricky Ross, Lorraine McIntosh, James Prime, Dougie Vipond, Ewan Vernal and Graeme Kelling.

They got a name for the winners in the world
I want a name when I lose....
Call me Deacon Blues [1]

Formed in 1985, this predominantly Glaswegian act were one of the top-selling UK bands of the late 1980s/early 1990s. The group's members were Ricky Ross, Lorraine McIntosh, James Prime, Dougie Vipond, Ewan Vernal and Graeme Kelling.

Ross, a former school teacher originally from Dundee, was the group's frontman, penning the vast majority of Deacon Blue's songs. He married female vocalist Lorraine McIntosh in the later years of the band's career.

Lorraine McIntosh, born May 1964, Glasgow, Scotland, UK) Singer and actress. McIntosh joined the band in 1987 as a vocalist.

The band's first album, Raintown, produced by Jon Kelly and released in 1987, is regarded by many as the band's finest effort, spawning the singles "Dignity", "Chocolate Girl" and "Loaded". Many consider Raintown to be a concept album, since nearly all the songs contribute to the overall theme of being stuck in a dead-end life in a deprived city longing for something better. The city that the album's title refers to is Glasgow, and the memorable cover art of the album is a shot of the River Clyde's docks taken on a miserable day from Kelvingrove Park.

The second album, 1988's When The World Knows Your Name, was the band's most commercially successful, with the mega-selling singles "Real Gone Kid", "Wages Day" and "Fergus Sings The Blues". However, music critics began deriding the band at this stage for pursuing commercial success over artistic quality, citing the earlier achievements of Raintown.

Jon Kelly returned to the producer's chair in 1991 for Fellow Hoodlums, and the album was met with more critical success, but by now the group's honeymoon period was over and their success started to wane. This album was followed up with Whatever You Say, Say Nothing in 1993, a much more experimental album which gained praise from the critics, but was a commercial failure.

The band released a Greatest Hits compilation the following year.

With Vipond's decision to quit the group in favour for a career in television, Deacon Blue split up in 1994.

Five years later, the band held an unexpected reunion gig in 1999, and this led on to a new album, Walking Back Home, with the band now working on a part-time basis.

The band released another album, Homesick, in 2001.

Though Graeme Kelling died from cancer in 2004, the band has vowed to continue in his absence.

The year 2006 saw Deacon Blue returning to the studio to record three new tracks for a Singles album - including the track "Bigger than Dynamite".

The band performed at Manchester United's Old Trafford stadium, as the pre-match entertainment for the Rugby League Super League Grand Final on the 14 October, and continued on to a full UK tour in November. They were also due to open Stirling's New Year party, but this was cancelled at the last minute due to extreme weather.

Riding on the Tide of Love

Live At The Glasgow Barrowlands CD2

Live At The Glasgow Barrowlands CD1