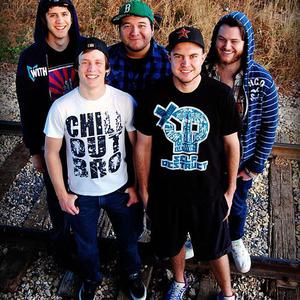 Giving every ounce of their being over to everything that they set their minds to, CLOSE YOUR EYES blew the top off of the Abilene, Texas music scene and has brought their high energy, passionate brand of hardcore to the masses. With one listen of their Victory Records debut, We Will Overcome, audiences everywhere will notice the authenticity of this spirit-filled, hardcore outfit. Shane Raymond (Vocals) and Brett Callaway (Guitar/Vocals) first met at Hardin-Simmons University. Being the only two "hardcore" kids in the cafeteria connected them immediately.

Shane Raymond (Vocals) and Brett Callaway (Guitar/Vocals) first met at Hardin-Simmons University. Being the only two "hardcore" kids in the cafeteria connected them immediately. This encounter stirred the realization that the pair had a common ambition; to write and play music of their own.

?We started searching for other musicians to round out the lineup,? explains Callaway. ?Some of those members lasted longer than others. Our first bass player might have played five shows with us at the very most. After a couple of tryouts and one disaster of a show where I let someone else play guitar so that I could play bass, we recruited Sonny. He really complemented the rest of the group and that's the point where we began to grow.? After some tumultuous, additional member changes, guitarist Andrew Rodriguez stepped in and David Fidler took over on drums. That's when CLOSE YOUR EYES hit the ground running.

CLOSE YOUR EYES channeled the energy of classic DIY, hardcore punk and took it a step further by applying real melody, clean vocals and incredibly catchy hooks; never sacrificing the ferociousness that accompanies genre. The band finally found their footing after taking the bare-boned power of a band like COMEBACK KID and mixing it with the melodies of RISE AGAINST and A DAY TO REMEMBER, all while infusing their shared dedication to their faith.

With this massive sound and inspirational lyrics, it was no surprise the band receives such an intense response to their music and especially their live show. Speaking about the progression of the songwriting in his eyes, Shane explains, ?It took me a long time to find my ?voice' and the things I really wanted to write about. Right around when we wrote ?Song for the Broken' I discovered that I could use lyrics to really express what's in my heart.? One of the band's biggest lyrical focuses comes from highlighting the ?broken' and needy people in the world. ?It doesn't take a specific religion to see that a lot of people in America are hurting. I really started having a heart for these people and saying, especially from a Christian standpoint, that we are being selfish.?

Make no mistake, although heavily influenced by their Christianity, the group don't plan on selling out their faith in exchange for their fame. ?We don't hide who we are, but a big reason we don't emphasize the fact that we're a Christian band is because we don't want our faith to be our primary marketing point. I would prefer if someone approached me after hearing our lyrics and questioned if we're a Christian band, because then I can say ?I am a Christian? and this is why'.?

Line In The Sand