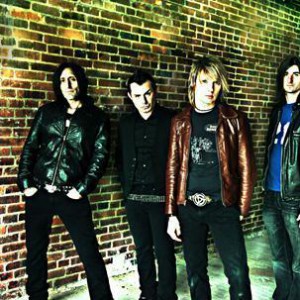 In an industry filled with trends, fads, fashions, and flash-in-the-pan stories of ?here today, gone tomorrow? generic flavors of the month, the one thing that remains constant is the need and love for pure, classic, hard rock and roll. John Allen, vocalist, songwriter and founding member of Baltimore's Charm City Devils, knows this. Rock and roll has been his passion since childhood. It has taken him into clubs, studios, tour buses, arenas, and around the world, as a drummer in his own bands and now as the frontman for Charm City Devils...

John Allen, vocalist, songwriter and founding member of Baltimore's Charm City Devils, knows this. Rock and roll has been his passion since childhood. It has taken him into clubs, studios, tour buses, arenas, and around the world, as a drummer in his own bands and now as the frontman for Charm City Devils, who is set to release their debut album, appropriately titled Let's Rock-N-Roll on Eleven Seven Music, helmed by label President Nikki Sixx.

"When I first heard Charm City Devils, my initial thought, along with everyone at Eleven Seven, was this is a real rock band! When I listen to their music I hear elements of credible bands like Aerosmith and I feel AC/DC. I like the fact that they're from Baltimore and the way they relate the working mans experience. They're not from New York or LA. You don't hear many bands from Baltimore and these guys carry on tradition with their own relevant and modern sound with classic riffs,? said Sixx.

Selected as Sixx's first signing to the label, it's obvious that there's something special about Charm City Devils. With their roots firmly planted in the blues, the band combines the best, loudest and most raw elements of hard rock, with a touch of punk spirit thrown into the mix. Recording primarily in Allen's home studio, Let's Rock-N-Roll retains what he calls ?a very high-energy, garage-y type of vibe.?

By the same token, as much as the band rocks out on the title track and songs like ?True Love? and ?Burn Baby Burn?, there is also a poignant side in autobiographical songs like ?Almost Home?. Says Allen, ?This album comes from an emotional level. The lyrics are very honest; they're pieces of my life, real things. Some are more sensitive and some deal with heavy issues, but they are balanced out by the fun, energetic songs that bring back some of that 1980s heyday of hard rock that audiences are longing for.?

Already established as a recording/touring artist and songwriter, and as the drummer for SR-71, Allen planted the seeds that would become Charm City Devils in his basement studio. ?I didn't have much gear,? he recalls, ?just good mics and real good preamps. But sometimes you write something and you know you have it, and that's what happened with "Burn Baby Burn", which was the first song I wrote for this band. That song was a catalyst for me to become a singer. I felt good about my writing and my voice and decided to give it a go. The track on the CD is actually the rough mix. I liked the raw, garage sound of it and we kept that.?

Allen says that finding the right musicians to become Charm City Devils was easy. ?I wanted guys who could play, first and foremost, who were seasoned but not too jaded,? he explains. ?I wanted guys who were experienced but still hungry and could maintain the playing level that I'm comfortable with. The first guys I thought of were local Baltimore musicians Vic Karrera, Anthony Arambula
,
Nick Kay and Jason Heiser. I knew that their playing would complement the songs I had written, that they would ?get it' and know where I was coming from.?

"Getting it? is what led Allen and his bandmates to Eleven Seven Music. With ?Let's Rock-N-Roll (Endless Road)? taking off as a hit single and top add on Baltimore radio stations, it didn't take long for the label, which was the #1 Independent Rock Label of 2008, to add the group to its roster, alongside M&ouml;tley Cr&uuml;e, Sixx: A.M., Buckcherry, Trapt, Drowning Pool and more.

In support of their debut release Charm City Devils toured as part of the Crue Fest 2 lineup along with Drowning Pool, Godsmack and Theory of a Deadman.

In January of 2012 Charm City Devils released the first single from Sins - a hard rock version of the folk classic "Man Of Constant Sorrow".

Sins was released on April 10, 2012. In support of the album Charm City Devils embarked on Sinner's Ball Tour 2012.

Don't forget to take a look at www.charmcitydevils.com