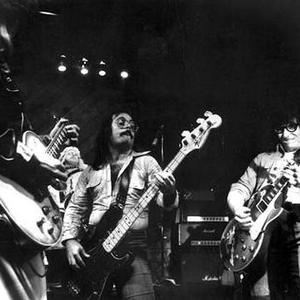 Brownsville Station was a band from Michigan that was popular in the 1970s. One of its earliest hits (1970) was called "Bebop Confidential" with song writing credits given to band founder Cub Koda. However, Gene Vincent recorded it in 1956. The song was called "Be Bop a Lula". This is probably why BS omitted it from their various anthologies. Their most famous song, "Smokin' In the Boys Room" (from their 1973 album Yeah![1]) was recognized as one of rock's earliest teen anthems, featuring angst filled lyrics, blaring guitars and a harmonica solo.

Their most famous song, "Smokin' In the Boys Room" (from their 1973 album Yeah![1]) was recognized as one of rock's earliest teen anthems, featuring angst filled lyrics, blaring guitars and a harmonica solo. The track reached #3 on U.S. charts and #27 in the UK Singles Chart[1]"Smokin' In the Boy's Room" was later covered by M?tley Cr?e in 1985. In 1977, Brownsville Station recorded the novelty song "Martian Boogie", which is played on Dr. Demento's radio show on occasion.

After T.J. Cronley left, he was replaced by Van Wert, Ohio native Henry "H-Bomb" Weck and in 1975 multi-instrumentalist and Detroit session musician Bruce Nazarian joined the band (it was Nazarian who sang lead on "(Lady) Put the Light on Me." "Smokin' In the Boy's Room" reached #3 in the Billboard charts, eventually selling over two million copies, and was covered a decade later by eighties metal band M?tley Cr?e. Their second-highest, Billboard-charting single was "Kings of the Party" which topped out at #31 in 1974. Best known as a live act fired up by Koda's onstage antics, the band's name was chosen because it was so long that it took up most of the marquees that rock venues used in that era, thereby hogging the limelight from whoever Brownsville happened to be playing with.

Though the band has been inactive for many years, bassist Lutz still resides in Ann Arbor. He works part time at a local music store called Oz's Music teaching guitar and bass lessons.

A Night on the Town