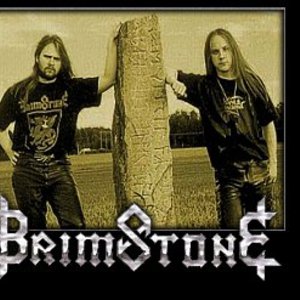 1) Brimstone is a Swedish power metal band with "death metal" vocals of Jan-Erik Persson which takes them far from being a traditional metal band. The band started under the name Havoc, releasing 2 demos before changing name to Brimstone. The band released only one album called "Carving a Crimson Career" in 2000. The track list as follows: 1. Breaking The Waves 2. Pagan Sons 3. Autumn 4. Carving A Crimson Career 5. King Of My Kind 6. Tunes Of Thunder

The band released only one album called "Carving a Crimson Career" in 2000. The track list as follows:

Even there is not much information about them on www; an interesting statement from Alex from the metal-observer.com website in his review about Brimstone band tells:

"What makes them differ now, is the pure Death Metal-voice of Jan-Erik Persson and at the same time the factor that most probably "saves" the band from a broader success. Death Metal-fans won't like the Power Metallish music, while Power Metalians will run screaming from the voice..."

Rather irresistable melodic prog/artrock LP with a light, airy feel throughout. The band belongs at the dreamy Moody Blues/Camel end of the prog spectrum, with flawless vocal harmonies, long classical-inspired keyboard excursions and plenty of non-aggressive guitar interplay. Side one is shorter structured song with a highpoint in the opening "Dead sleep at night" which is almost Beatleish in its directness and appeal. Side 2 is a sidelong suite in five movements and mainly instrumental, and fairly successful at that. The album's emotional range isn't terribly wide and the band skirts daringly along the edge of blandness, but the end result is superbly realized and charming in its harmonious mood. This is one of the least pretentious local prog LPs, and also one of the least preaching Christian albums around, and what might have been a dog turns out to be something of a surprise winner. There is also a non-LP 45.
--

3) Brimstone is a one man band from San Antonio, Texas that plays black metal in the vein of Demoncy and Beherit.