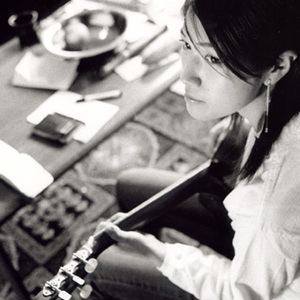 Kaori Asada (????, born April 16, 1973, in Kyoto, Japan), known by her stage name BONNIE PINK, is a Japanese singer-songwriter. She first appeared on the scene in 1995 with the album Blue Jam. Although it failed to gain her much notice, two years after meeting The Cardigans producer Tore Johansson, BONNIE PINK released Heaven's Kitchen, which gained her good sales and recognition. To date she has released eleven studio albums, as well as several compilations.

She has sung ending themes for several Japanese anime: "It's gonna rain!" for Rurouni Kenshin, "Last Kiss" for Gantz, "Cotton Candy" for Guyver: Bioboosted Armor. "Love is Bubble" is used as the theme song for the Japanese movie Memories of Matsuko (????????), which also casts her.

BONNIE PINK is another of the multi-talented females doing it for themselves; not only a song-writer, she often takes part in the composing process and has proved to have talent in it. Her style is somewhat softer than singers such as Shiina Ringo, but her skill is no less evident. She also has a talent for singing in both English and Japanese with reasonable skill.