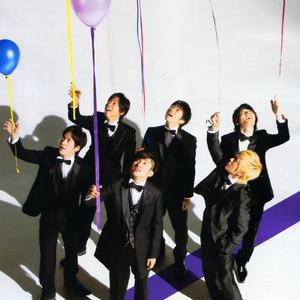 V6 is a six member Japanese boy band formed by Johnny & Associates. They debuted on November 1, 1995 with their first CD-Single "MUSIC FOR THE PEOPLE". As they are 'idols', each member takes part in a variety of activities - as well as singing, they appear in TV dramas, variety shows, host radio programmes etc. Due to the difference in age between the six members, sub-units were formed within the group. The three oldest members formed 20th Century (Tonisen, in short) whilst the youngest three formed Coming Century (Kamisen, in short).

There are many theories behind the meaning of the "V" in V6. It is said that it stands for Victory, but members have mentioned on TV programmes that it also means Volleyball (As their debut single was used in the World Cup Volleyball Tournament in 1995), Versus (20th Century versus Coming Century), Vegetable (as Sakamoto's parents own a green grocers), Vicycle (obviously means Bicycle - Nagano's parents own a Cycling store) and Veteran (as Inohara was told). It also could stand for Volume, which derives from their album that they made.

V6 celebrated their 10th year anniversary in 2005. They commemorated the event by holding about 30 concerts in sold-out arenas all over Japan, holding 3 major "Thank You Events", releasing a hit movie "Hold Up Down" and releasing a new album "Musicmind". They also had a rare "Handshake Session" with hundreds of thousands of fans in Tokyo, Nagoya, Osaka and Fukuoka.