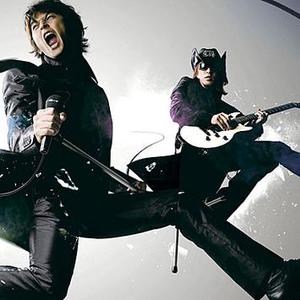 Formed in 1988, B'z are guitarist Tak Matsumoto and vocalist, Koshi Inaba. Over the span of twenty-three years, B'z have released 17 albums, and 49 singles, with 45 of those singles consecutively debuting #1 on Japan's Oricon Single Chart. B'z have sold over 80 million CDs in Japan alone, making them the best-selling artist in Japan's history. Under the recommendation of Steve Vai, B'z were inducted into the Hollywood Rock Walk in 2007 as the first Asian artist.

As a world acclaimed six-string virtuoso, Tak Matsumoto joined legendary guitarists Jimmy Page, Joe Perry, Ace Frehley and Slash, to become the fifth guitarist in the world to have his own Gibson USA signature model, the ?Tak Matsumoto Les Paul.' In 2010, Matsumoto released Take Your Pick with jazz guitarist, Larry Carlton, and won the Grammy Award for Best Pop Instrumental Album at the 53rd Grammy Awards last February. Koshi Inaba's solo efforts include the studio album, Hadou which was also released in 2010 and debuted number one on the Oricon album charts. Inaba also appeared as a guest vocalist on Slash's solo album last year.
Besides releasing a long line of number one singles and albums in Japan, B'z are known for their dynamic live shows. They began 2010 with a sold-out dome tour in Japan, including 4 nights at the famed Tokyo Dome with 600,000 fans in attendance.
B'z had North American tour visiting Vancouver, San Francisco, Los Angeles in July 2011. After providing a song to ?Download to Donate Tsunami Relief? organized by Music For Relief, B'z was asked to join the intimate private show with Linkin Park to raise money for Japan earthquake/Tsunami relief. The show took place on 8/31 with great success raising more than $35,000. They will start the Japan tour with 2 shows in Sendai which will benefit the affected area. Their tour ?B'z LIVE-GYM 2011 ?C'mon-? includes 17 arena shows and 9 dome shows and continues till the last show on 12/25 at Tokyo Dome.